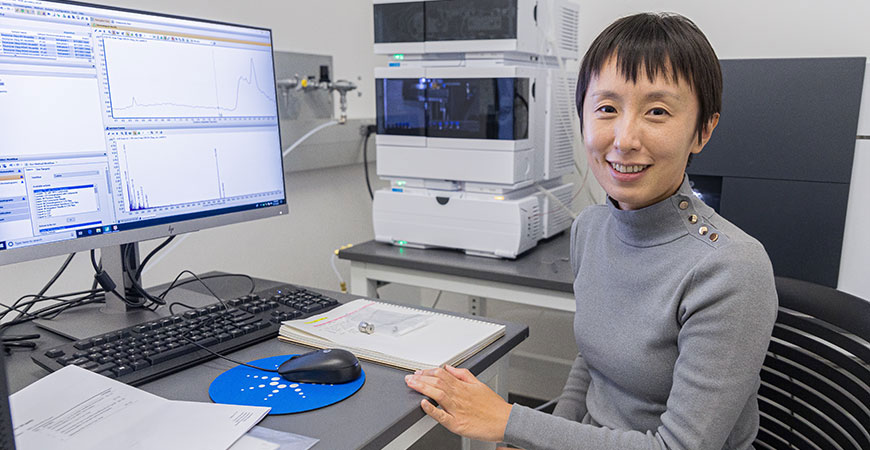 Although climate change is still a very real challenge, the past decades of efforts to reduce the effects of human activities on the atmosphere have been potent enough to have thrown off the models scientists use to understand and forecast the atmosphere’s chemical composition and cleansing capacity.

But a new study by UC Merced Life and Environmental Sciences Professor Xuan Zhang and colleagues reveals a way to more reliably predict what's going on in the atmosphere. She and her colleagues discovered a new mechanism by which isoprene — the hydrocarbon emitted by plants — is photochemically oxidized, producing ozone and fine particulate matter (PM2.5), two essential ingredients in smoggy air pollution.

People who live in the San Joaquin Valley are quite familiar with the health effects of the brown haze that hangs over the skies in the summertime and the smoke and ash from wildfires that sometimes restrict people from even opening windows, let alone going outside safely. Much of the risk from the haze and smoke comes from ozone and PM2.5.

Research has clearly established that particle pollution and ozone threaten human health at every stage of life, increasing the risk of premature birth, metabolic disorders, susceptibility to infections, causing or worsening lung and heart disease and increasing the risk of heart attacks or strokes, according to the American Lung Association.

Because of the planet's vegetation, isoprene is the most abundantly produced biogenic volatile organic compound on Earth. It is not harmful by itself, but its degradation in polluted air has been widely studied. However, there have been very few studies on isoprene’s oxidation in the presence of less pollution.

“The major difference lies in the amount of ozone and PM2.5 that isoprene photooxidation is responsible for,” Zhang said. “Our mechanism suggests that isoprene contributes to less ozone but more PM2.5 than traditionally thought.”

The National Science Foundation funded the study conducted by Zhang and Siyuan Wang from the Cooperative Institute for Research in Environmental Sciences at the University of Colorado, Boulder, and John Orlando and Geoff Tyndall from the National Center for Atmospheric Research in Boulder. Two of Zhang’s graduate students, Zeyi Moo and Kate DeMarsh, also took part.

“Such a dataset provides strong constraints on the kinetics of the isoprene peroxy radical interconversion — a newly discovered mechanism that essentially governs the isoprene oxidation carbon flow,” the researchers wrote.

Zhang explained that the study indicates isoprene peroxy radical interconversion operates competitively in the present atmosphere and constantly affects the chemical composition and cleansing capacity of the atmosphere.

“We found that the traditionally accepted mechanism no longer works in our current air with much reduced pollutant emissions by human activities,” she said. “This new mechanism will change how air quality and climate models predict the self-cleansing capability of the air, as well as the amount of ozone and PM2.5 generated, improving regional air quality forecasts and global air composition projections for the future.”

However, Zhang said, while ozone is a greenhouse gas and leads to climate warming, PM2.5 is a major “climate forcer.”

“The chemical constituents in PM2.5 are responsible for the PM2.5 climate effects. For example, soot in PM2.5 has a warming effect, but PM2.5 from isoprene may have a cooling effect,” she said. “The overall climate effect of PM2.5 is still under active research.”