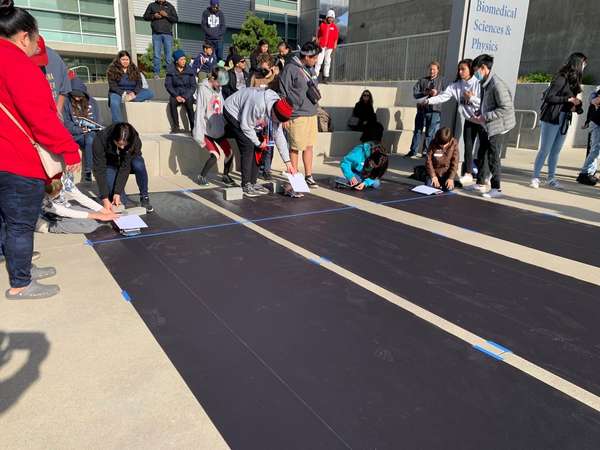 It wasn’t exactly “Racers, start your engines.” More like, “Racers, remove
your covers.”

But the solar car challenge put on by CalTeach and the Solar Energy
Association at UC Merced Saturday, Nov. 5, was still an action-packed day
of racing.

Several dozen middle school students, their teachers and parents gathered
on campus to test out the cars they built over the last few weeks.

Teams of students received solar kits, which include a solar panel, motor,
wheels, axles and other small components. It was up to them to determine
how to construct their cars.

“Teams will have to think about a lot of different things when making their
cars,” said Dylan Roberts, a UC Merced student who took part. “What
material should they use to make the car’s body? Should the car accelerate
faster or have a higher top speed? How should they position the solar panel
to generate the most electricity?

“All of these problems and more will need to be solved in creative ways by
our teams.”

Those creative ways included construction out of lots of cardboard and
Styrofoam, and in one case an energy drink can. Some cars had flat solar
panels mounted on top, while other teams built their cars so the panels sat
at an angle.

Teams raced in double-elimination heats, with onlookers cheering them on.
Fishing line attached to bricks at each end of the track kept the cars
heading straight.

The day was somewhat overcast, but that didn’t deter the participants’
enthusiasm. There was plenty of sun available to power the roughly
foot-long cars along the track.

Though there were cheers for the winners, the real goal of the race was to
encourage enthusiasm around science, technology, engineering and
mathematics (STEM) education, and to introduce the younger students to the
UC Merced campus. It also provided an opportunity for participants in UC
Merced’s CalTeach program to work with students.

According to its website, the program is designed to address the shortage
of science and mathematics teachers in California's elementary, middle and
secondary schools, particularly in the Central Valley region. CalTeach
recruits and prepares mathematics and science majors for teaching careers
by providing special coursework and field experiences in K-12 schools in
the Central Valley, as well as direct pathways to teaching credentials in
California.

“I like it,” said one competitor, an 11-year-old sixth-grader at Charles
Wright Elementary School in Merced. “It’s fun to race cars.”

His teammate agreed. Their car, named Ninja Turtle, came in first during
one heat. Their first try, it didn't go at all, they said.

That wasn’t an issue for Ninja Turtle on Saturday, but some other cars had
trouble getting off the starting line. CalTeach students were on hand to
help make last-minute fixes – and maybe teach a little science along the
way.