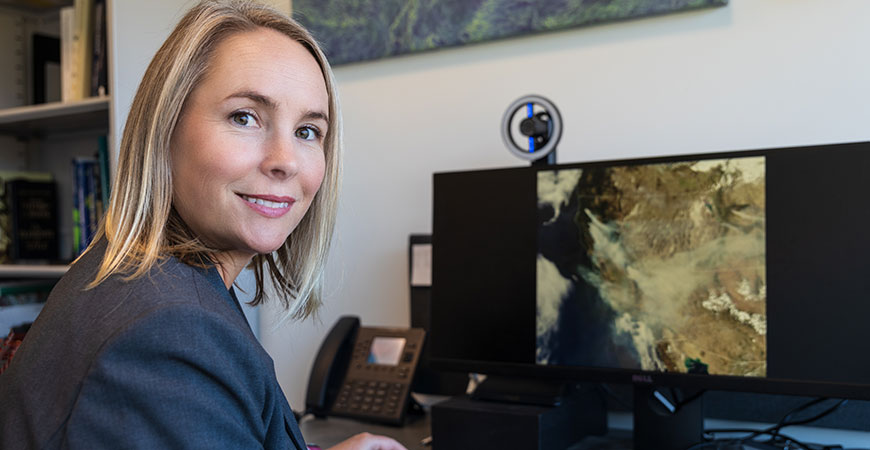 Professor Erin Hestir is taking a bird's-eye view of water use in the Valley.

Like many other researchers, environmental engineering professors Erin Hestir and Joshua Viers are trying to quantify water use in California’s Central Valley.

The difference is, they are doing it from the sky.

Through NASA's applied sciences program, their team will leverage the power of Earth-orbiting satellites and drones to gather data with high spatial and temporal resolution and then analyze it to help resource managers make better-informed decisions, particularly around water use in California’s San Joaquin Valley.

They’re collaborating with Point Blue Conservation Science, a nonprofit science team based in the Bay Area.

“Point Blue is a leader in finding nature-based ways to address climate change and biodiversity loss. We're really excited to be partnering with them,” Hestir said. “This project will help us better balance water allocation not only for human uses such as agriculture, which are really important, but also to make sure we are sustaining biodiversity and ecosystem functioning critical to the Valley.”

Water is a limited resource across the West. Over the past 100 years, an extensive system of reservoirs and water conveyance structures have been engineered to support the needs of human communities, agriculture and ecosystems. Model projections suggest water may become even more limited as the result of climate change, and increasing frequency and severity of drought are pushing water management programs to their limits, the team wrote in their proposal.

“The Central Valley … is a nexus for water resources and epitomizes the challenges facing water systems in the West,” they wrote.

Another critical partner in the project is the Grassland Water District, which seeks to maximize the use of limited water available for ecosystem functioning, as well as waterfowl and shorebird habitat. The district, local to Merced County, manages more than 75,000 acres of wetlands for the Grassland Resource Conservation District.

Although managed wetlands are an essential component of water use planning and budgeting, there are limited data about the extent and magnitude of managed flooding — often for the purposes of providing habitat for waterfowl and supporting local duck clubs — that can be used to inform water budget models.

Satellites have been able to track the surface water in different wetlands across the Central Valley, but not yet the depth of the water. That's where UC Merced and Point Blue come in. A central component of this NASA-funded project is developing novel algorithms that mine these satellite data to determine the extent, depth and duration of flooded fields and wetlands.

“The ability to generate data on water depth to populate wetland water budgets…will increase the capacity to inform GSPs in a cost-effective way,” General Manager of the Grassland Water District Ric Ortega wrote.

“Rather than assuming there is water in the wetlands because it's been released from the rivers, we're going to try to use new, cutting-edge NASA technology, including space-based sensors as well as drone sensors to create three-dimensional representations of the landscape,” Hestir said. “That will help us understand how much water is truly in the wetlands, which will give people more information when it comes to deciding on how to balance all the different needs.”

The project will also help answer important questions, such as how changes in land management will affect water use and how water use varies across extreme events, particularly drought and flood. This research builds on more than a decade of water research led by UC Merced that is specific to the San Joaquin Valley and its watersheds.

“It is incredibly important that we work with local agencies and water districts to understand their information needs, and that we provide actionable outcomes from our research in return,” said Viers, who leads the Secure Water Future research consortium. “The tools and insights we are developing here will aid in data-driven decision making across the Valley and beyond.”

“A lot of people don't know this, but California is one of 25 hotspots around the globe for biodiversity,” Hestir said. “We have a lot of unique species across the state, and the San Joaquin Valley is a hot spot for our migratory waterfowl, wetlands and surrounding grasslands.”

Resource managers must be careful about water allocation, she said, because it must sustain the robust agriculture economy, a large number of residents and the valuable biodiversity that keeps ecosystems stable.

“In our dry years, every drop counts,” Hestir said.