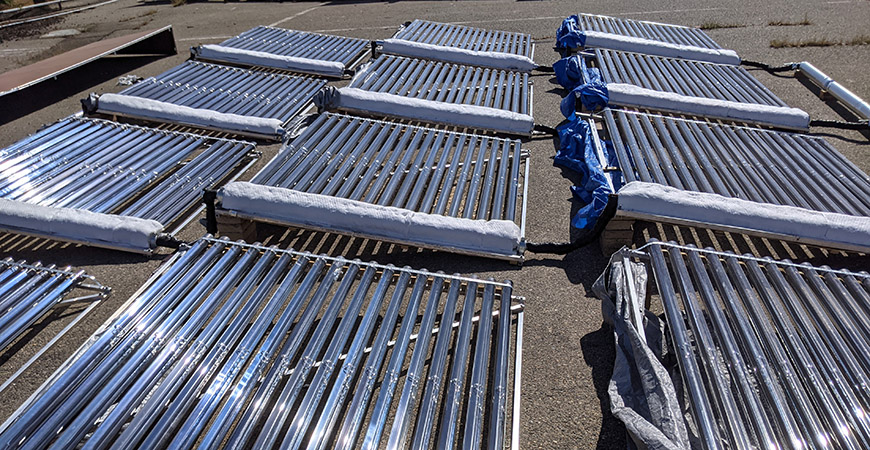 A 10 kW array on location at UC Merced. This is one of the two innovative technologies in the Department of Energy's desalination contest.

When people hear the word “solar,” many think of solar panels on a house, which generate electricity. But there is another way to use energy harnessed by the sun: heat.

Earlier this year the CEC awarded Winston’s company, Winston Cone Optics, $1.4 million to reduce emissions in the food processing industry. The company is working with Tyson Foods in San Lorenzo to find affordable ways to efficiently use solar thermal heating for an on-site boiler on an industrial scale. The company developed a solar water heater at salami processing facilities.

“The project will support the decarbonization effort of California's commercial and industrial sectors and reduce dependence on natural gas by using a unique asymmetric non-imaging optical design and scaling up the technology through iterative demonstrations,” states the CEC.

Winston is considered the “father of non-imaging optics” and invented breakthrough technology in solar energy. 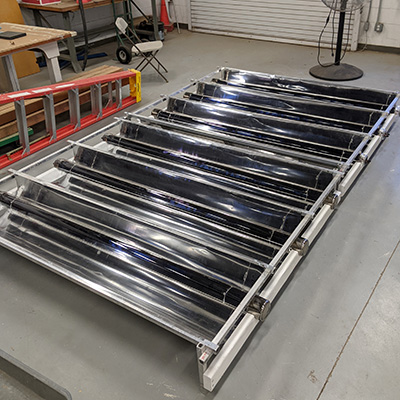 A 3 kW prototype that will soon be tested at UC Merced. It is one of the two innovative technologies in the Department of Energy's desalination contest.

Winston Cone Optics also has two innovative technologies entered in the U.S. Department of Energy’s “American Made Challenges” contest which is seeking solutions for water desalinization.

The first is a low-cost, compact solar concentrator designed to minimize the cost, complexity and maintenance of a solar thermal collector system. The optics eliminate the need for any collector tracking or tilting, allowing modules to be installed adjacent to one another to maximize land use.

The second is also a low-cost and compact solar-thermal collector, which maximizes solar-to-thermal efficiency without tracking, using a silver reflector coating to concentrate sunlight on an aluminum mini-channel absorber. This technology has an extremely low-cost potential because the collector is made almost entirely of low-cost glass and aluminum.

“I am pleased the prize committee is recognizing the value of non-imaging optics which enables stationary concentrators to produce steam. The resulting collectors have a unique synergy with desalination applications,” Winston said of his invention.

“These two innovations put the UC Merced spin-off company on the map as a quarter finalist of American-made solar desalination, not just once, but twice,” said Jiang.

The final prize winner will receive $1 million in cash to develop a demonstration project.