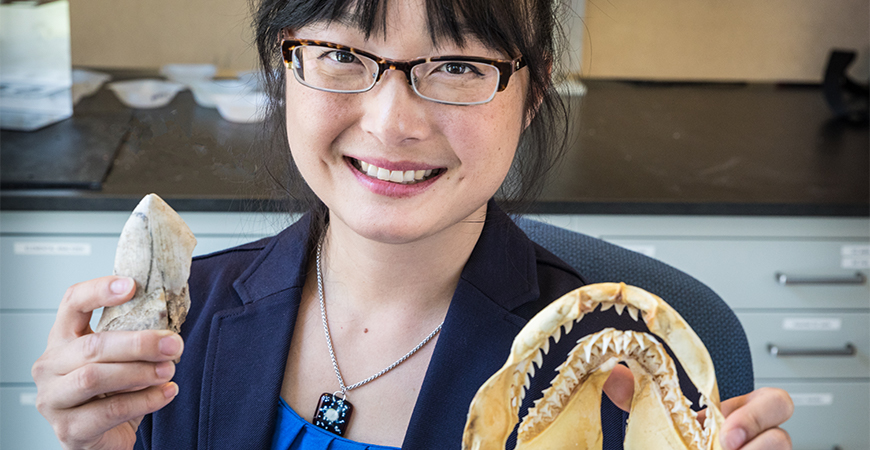 A character in a very famous movie about a great white shark once said all sharks do is “swim and eat and make little sharks.”

It turns out they do much more than that. Sharks have roamed Earth’s oceans for more than 400 million years, quietly recording the planet’s history.

If a researcher like paleoecology Professor Sora Kim wants to “read” those records to learn about major global changes that took place about 50 million years ago, she must decode the information stored within what remains of ancient sharks — their teeth.

Teeth from the long-extinct sand tiger shark are providing new information about massive global climate change and the movement of tectonic plates, which Kim and colleagues have detailed in a recent paper in the journal Paleoceanography and Paleoclimatology.

Earth was very different during the Eocene, between 56 and 33.9 million years ago. With a greenhouse climate, areas now persistently frozen were temperate and the planet generally was warm and humid.

There has been debate about the timing and depth of the Drake Passage’s opening. The Passage is the 620-mile-wide, 11,000-foot-deep strait between South America and Antarctica that allows ocean water from all major oceans to mingle and form the Antarctic Circumpolar Current.

The opening, it has been thought, led to the climate changing from greenhouse to icehouse, which persists now.

The data Kim and her fellow researchers analyzed shows something different.

“Analyzing isotopes in the shark teeth, we can track the water-mass transfers between ocean basins and see about when the passage opened up,” Kim said. “But we don’t see evidence of the climate shift at that time. This will make people question what we think we know about that time and area.”

Professor Matthew Huber, with Purdue University, a collaborator on the study and co-author of the paper, said scientists studying modern climate and weather use satellites and weather balloons, but that wasn’t possible 50 million years ago.

“As a scientist who tries to make better predictions of future climate with climate models by first testing them on the data we have from climates of the distant past, I can’t help be struck by how cool this study is,” Huber said. “Here, we’re using long-dead sharks as probes to explore the temperature structure of the ancient oceans — fleshy thermometers with big, pointy teeth and a bad attitude.”

Sharks’ body temperature is regulated by their surrounding water. During the Eocene, sharks were plentiful in all of Earth’s oceans, which were much warmer. When the climate shifted, a limited number of species adapted to the cold, polar regions, and there are no sharks in Antarctica now.

“Climate modeling is mostly solving equations on computers so it’s amazing to have some direct, tangible connection with the conditions experienced by an ancient and beautiful life form,” Huber said. He has another connection to the study, as well — his uncle co-wrote the scripts for the first three “Jaws” movies. “Now I feel lucky that somehow I also got a chance to work with sharks.”

Supported by a grant from the National Science Foundation’s Office of Polar Programs, Kim — with the Department of Life and Environmental Sciences — and her colleagues used teeth previously collected around Seymour Island, near Antarctica.

“The results of this work are really exciting because they integrate shark paleontological studies, geochemical analyses for environmental reconstruction and novel global climate model simulations to look at timing and depth of the Drake Passage opening,” said Michael Jackson, acting head of the NSF’s Antarctic Sciences section.

The Seymour Island area is considered “the Rosetta Stone” for Southern Hemisphere evolution because of its excellent preservation of diverse, high-latitude flora and fauna that captures the shift from greenhouse to icehouse conditions, the researchers wrote. The teeth came from sand tiger sharks of all ages and sizes, from babies to about 15 feet long.

“We would expect to see the temperature change to register in oxygen isotopes,” Kim said. “But the teeth show that the Antarctic water temperatures were much warmer than we would have thought. The bulk of data from shells shows that the water there was always cooler and got colder over time.

“Our study found that sand tiger sharks of all ages lived in this location and water temperatures recorded by their teeth stayed constant over time, despite the clear continental movement and changes in ocean circulation.”

Though the sand tiger shark teeth studied were from an extinct species, sand tiger sharks haven’t changed much over the millennia and there are some alive today that are very similar to the extinct ones. They still like warmer water, Kim said.

She has some ideas about why the fossil record and a climate simulation showed one set of facts while other data doesn’t. It could be that the sharks lived closer to the surface, where the water stayed warmer, or that they migrated to South America.

Finding those answers will require more study, but one thing is sure, she said.

“Shark teeth contain a lot of data,” Kim said. “Their potential should be considered as part of other researchers’ analyses and geologic reconstructions to study ancient climate.”