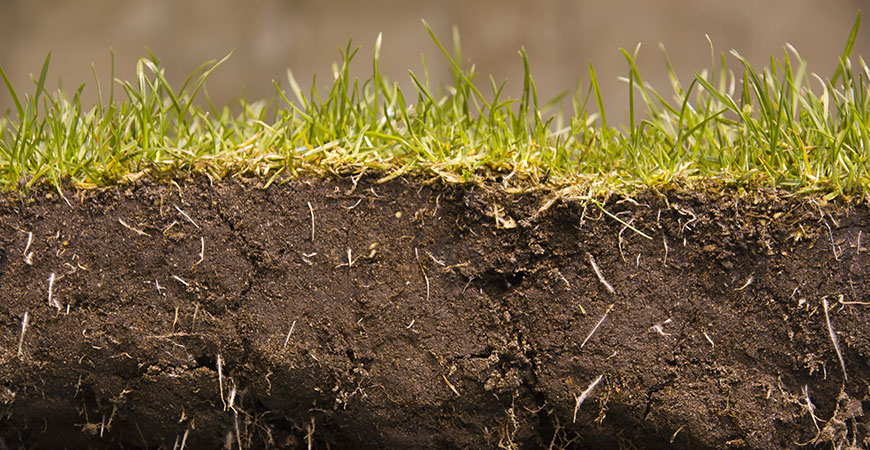 Looking below the topsoil allows researchers to see a fuller picture of climate warming's effects.

Scientists often study the relationship of global warming and topsoil because soil is an important mediator of climate change. A newly released study indicates it’s critical to consider subsoil in climate-change research, too.

A new paper in the prestigious journal Nature Communications by Professor Stephen Hart, his former graduate student Nicholas Dove and colleagues at the Lawrence Berkeley National Laboratory details why as it reveals the findings of a 4 ½-year study of both top and subsoils.

“There have been several previous field studies that have warmed soils experimentally at the ground surface and measured changes in soil microbial communities and carbon and nutrient pools in surficial soil, but this is one of the only studies that has warmed the entire soil depth profile and made such measurements, both near the surface and deep within the soil,” Hart said. “Nicholas’ Ph.D. research has highlighted the importance of studying deep-soil processes and suggests that existing predictive models of the global climate should not simulate the soil microbial response to a warmer world as a unified one.”

Climate change has created a feedback loop between soil and the atmosphere. Globally, soil stores about twice as much carbon as the atmosphere does. As the climate warms, so does the soil. Higher temperatures mean less water, more plant death and increased decomposition, which is good for soil’s microbial communities. They consume carbon stored in the detritus and release CO2 back into the air.

To see how different microbial communities react to climate change, Hart, Dove and their colleagues mechanically warmed soil to a depth of one meter. They saw differences in how the microbes reacted, but one thing remained the same — the microbes at all depths continued to release more CO 2 than their counterparts in non-warmed soils.

“If you want to keep carbon sequestered in the soil, keep temperatures low,” Dove said. “We need to prevent warming.”

At sites in El Dorado County, the researchers warmed the soil up to 4 degrees Celsius above their ambient temperatures to simulate the upper limit climate models have predicted the Earth’s climate will increase by 2100. While warmer soils didn’t change how efficient microbes are at consuming the carbon, they did change the composition of the microbial communities.

“The microbes in the upper soil have more carbon and nitrogen, which is their food. Therefore, certain microbes were able to capitalize on to the temperature change more quickly than the bacterial communities in the deeper soil,” Dove explained. “In the topsoil, if one type of microbe population declined, another type would replace it. But in the deeper soil, declining microbial populations were replaced by the rest of the community as a whole, rather than a specific population.”

He was monitoring the physiology of the bacteria and found that their genetics allowed them to degrade various types of carbon substrates, particularly in the subsoil.

“If you can eat different kinds of carbon, you may be able to resist changes due to warming. “We think this could explain why the subsoil communities lag in their adaptation to change,” Dove said.

Dove, who earned his Ph.D. in 2019, now works at Oak Ridge National Laboratory in Tennessee. But the work he did on this study was conducted while he was still a grad student, under a fellowship from the Department of Energy’s Office of Science. The fellowship allowed him to spend several months at Lawrence Berkeley to enhance his dissertation experience.

He now works with microbes in plants, studying how they affect plant health and productivity.

“We think they play as important a role in the lives of plants as the gut microbiome does in humans,” Dove said.

Hart is with the Department of Life and Environmental Sciences in the School of Natural Sciences, and is an affiliate of the Sierra Nevada Research Institute. He and his research group continue to study the impact of climate change on soils, and the use of ecological restoration to reduce greenhouse gas emissions and increase carbon storage in California’s forests and mountain meadows.