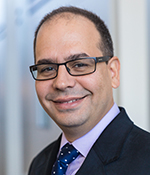 Civil and Environmental Engineering Professor Josué Medellín-Azuara is part of an international team of researchers who conducted a systems analysis on water security in Jordan the findings of which were published in Proceedings of the National Academy of Science. The paper, titled “A Coupled Human-Natural System Analysis of Freshwater Security Under Climate and Population Change” examines Jordan’s water crisis due to increased water use, population growth, climate change and other factors. The study finds that in the absence of demand management and supply interventions, and major reforms in the water sector, nearly 90 percent of the lower income population water security is under threat.