RadioBio Breaks Down Science Through the Airwaves 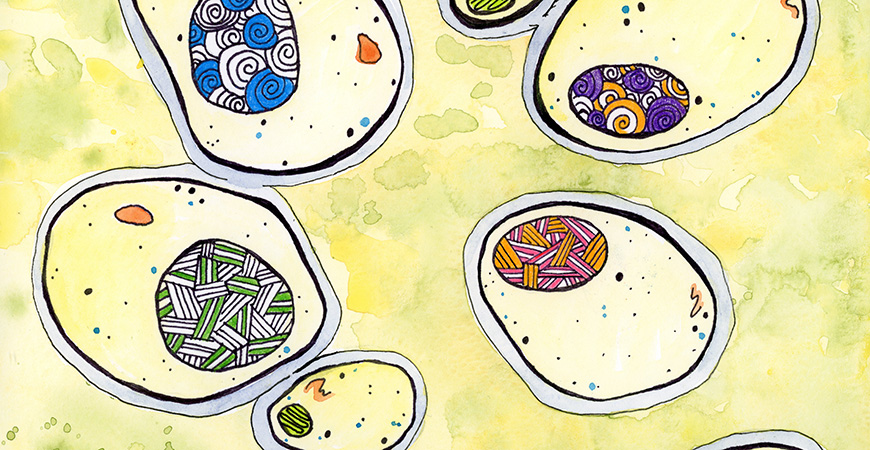 Ph.D. student Kinsey Brock does many of the illustrations for the RadioBio podcast; this one is from RadioBio's second season with Stanford Professor Aaron Gitler.

Audio has become a top form of entertainment over the past several years, in large part due to the rising popularity of podcasts. UC Merced graduate students are seizing the opportunity to help improve science literacy.

A group of Quantitative and Systems Biology (QSB) graduate students started RadioBio, a science podcast that discusses biology topics, in 2016. The podcast sparked from a discussion between the students and Professor Fred Wolf during a graduate professional skills development course.

“We wanted to develop as people who can communicate science to people outside of our fields by breaking down what we do and helping others understand why it’s important,” founding member and former president of RadioBio Kinsey Brock said. “We also wanted to get the UC Merced name out there and feature biology that was happening here.”

RadioBio’s goal is to bring science to everyone, especially underserved communities, by breaking down the walls between scientists and non-scientists.

“There are students out there who would be interested in biology, but they don’t have the resources and access,” RadioBio President Lillie Pennington said. “We want to highlight research that is being done and make it more accessible and relatable to our audience.” 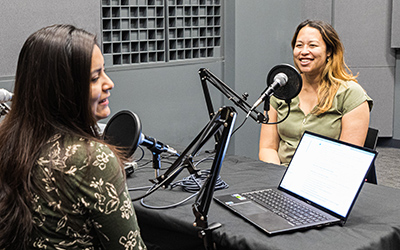 Graduate student led science podcast RadioBio is breaking down the walls between scientists and non-scientists.

For the podcast, the students interview guest lecturers for the QSB seminar series, on topics ranging from autoimmune diseases to the evolution of flying lizards. Each episode is a team effort with five students working on it from start to finish. The group started with 10 members and is now up to 20, including QSB and Environmental Systems students, who began with little to no podcasting experience.

The podcast pulls in about 200 listeners per episode from across the nation and world, and was recently picked up by the National Science Foundation’s Science 360 Radio.

“It is a great way to practice your science communication,” Pennington said. “I consider it a hobby, but it is also a part of my Ph.D. It has made me a better communicator.”

RadioBio has produced two “dispatch” episodes — one on the campus’s vernal pools and one on the drought in California. These include multiple points of view about a subject area. Stay tuned: The group is working on a dispatch about Valley fever.

One unique aspect of the science podcast is the original artwork created by a group member for the cast’s webpage.

“Each has a handmade piece of art to accompany it and illustrate the science in the episode,” Brock said. “It’s another way of communicating science but through art as a medium. It’s an imaginative way to engage people.” 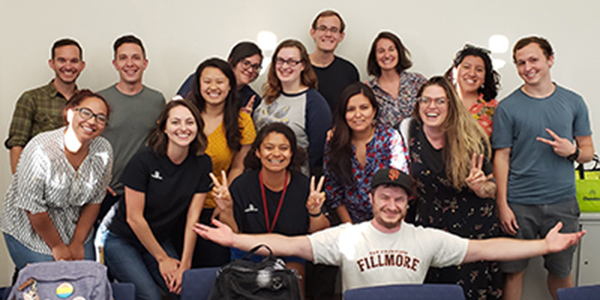 RadioBio started with 10 members and is now up to 20, including Quantitative and Systems Biology and Environmental Systems graduate students.

To further connect with the community, the organization hosts outreach events such as its upcoming ValleyBio event. The second annual event is 6-9 p.m. Oct. 18 at UC Merced Downtown Campus Center 655 W. 18th Street, in Merced, in conjunction with the campus’s Homecoming Block Party. Community members can learn more about science through interactive displays and hear from scientists about local flora, fauna and other topics that are relevant to the San Joaquin Valley. In addition, local artists will display their work in the gallery space and local food will be available for purchase.

“We want to see the ‘ah-ha’ moments in the eyes of adults and children and see non-UC Merced folks come to the event and take away something,” events coordinator and former Vice President Jackie Shay said. “Everybody is a scientist; they just don’t know it yet.”

RadioBio also partners with SACNAS — the Society for Advancement of Chicanos/Hispanics and Native Americans in Science — to bring scientists from diverse academic and social backgrounds to speak on campus.

“It’s a labor of love,” Brock said. “It’s been a highlight of my time at UC Merced because we’ve gotten to work on something we all believe in. We’ve become each other’s best friends and cheerleaders through the organization.”

From discussions with leading scientists to original pieces of art and community outreach events RadioBio is making it possible for everyone in Merced and beyond to have the opportunity to learn science.