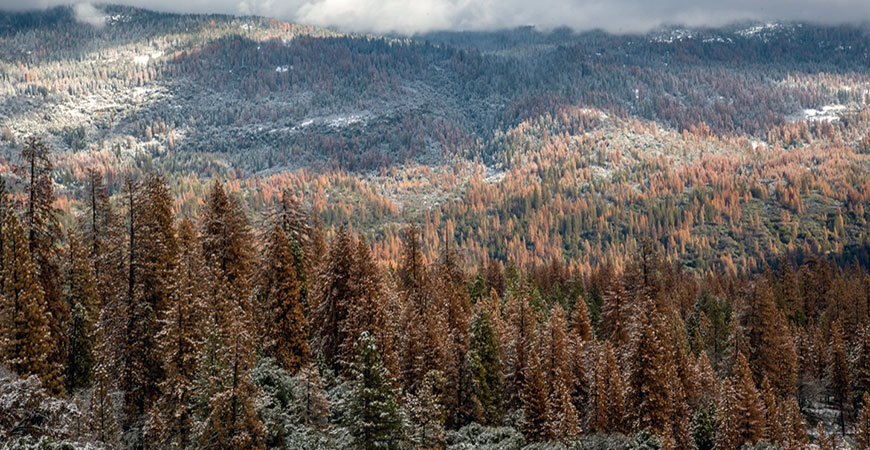 The scope of the tree deaths is evident when viewed as part of the larger forest.

The most extreme drought event in hundreds of years caused a catastrophic die-off of the Sierra Nevada’s mature trees in 2015-2016.

A study published today in Nature Geoscience details how UC Merced Professor Roger Bales and his colleague Professor Michael Goulden from UC Irvine tracked the progress of the devastation caused by years of dry conditions combined with abnormally warm temperatures.

The researchers warn that matters are expected to get worse as global mean temperatures increase.

“Parts of the Sierra Nevada reached a ‘tipping point’ in 2015, where annual precipitation plus stored subsurface water were not enough to meet the water demand of the forest,” Bales said.

The trees in California’s mixed-conifer mountain forests have roots that can draw water from as deep as 5 to 15 meters down, which has historically protected the trees against even the worst multi-year droughts.

But the severity of California’s 2012-2015 dry-spell “exceeded this safety margin,” the researchers said. When forest stands exhausted the subsurface moisture, they became vulnerable to attack by pests, leading to widespread tree death.

From 2012 to 2015, the entire state experienced a crippling drought, but it was especially severe in the southern Sierra Nevada. The four-year period was the driest in the past century, combined with below-average precipitation and above-average warmth extending year after year.

“This forest die-off can be viewed as a ‘perfect storm’ — the intersection of four years of low precipitation, hotter temperatures than in past droughts, and a heavily overstocked forest from centuries of fire suppression,” Bales said. 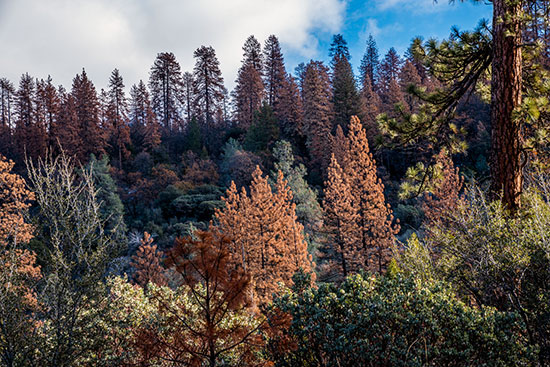 Trees faced an epic drought from 2012 through 2015, which scientists say will happen more frequently as the climate warms.

The research was supported by National Science Foundation and the U.S. Department of Agriculture. Observations by the U.S. Forest Service Aerial Detection Survey showed that many tree stands suffered complete loss of mature conifers. Pines were especially hard hit by an infestation of bark beetles.

Sierra Nevada Research Institute Director Bales, Distinguished Professor of Engineering with the Department of Civil and Environmental Engineering in the School of Engineering, and Earth System Science Professor Goulden examined tree communities at a variety of elevations and latitudes in the sprawling mountain range using field and remote-sensing observations.

A post-drought survey found that tree mortality was greatest near 3,800 feet of elevation, with nearly 80 percent loss in 2016.

The study outlines a key factor in the die-off: A period of unusually dense vegetation coinciding with a prolonged drought and warmer-than-usual temperatures. The heat and proximity of trees and plants to one another caused accelerated evapotranspiration — moisture evaporating from leaves and rising up in the sky as water vapor. This caused the trees to draw even more water from the ground.

“We expect climate change to further amplify evapotranspiration and ground moisture overdraft (when more water is taken out of the soil than is replaced by precipitation) during drought,” Goulden said. “This effect could result in a 15 percent to 20 percent increase in tree death for each additional degree of warming.”

With their improved understanding of the contributions of factors such as elevation, vegetation density, heat, precipitation and soil water amounts, the researchers said they now have a framework to diagnose and predict forest die-offs brought on by drought.

“Using readily available data, we can now predict where in mountain forests multi-year droughts are likely to have the greatest impact, and the threshold at which those impacts are expected to occur,” Bales said.