Humans are not the only animals to build elaborate housing and grow crops—or to add carbon dioxide (CO2) to the atmosphere through their industry. A new study shows that the leaf-cutter ant Atta cephalotes is also a master builder and cultivator and a significant source of greenhouse gas emissions.

Found in ecosystems throughout the New World, Atta species excavate massive, several-meter-deep underground nests that include complex tunnels and chambers, exits, and entrances. The ants drag vast quantities of vegetation into the nests to feed their main food source: a fungus called Leucoagaricus gongylophorus. To maintain the proper concentrations of CO2 and oxygen belowground, the nests also feature air vents and chimney-like turrets that enhance ventilation. 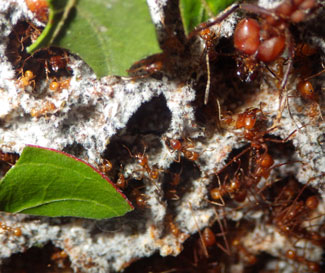 Warming soils are releasing ever-increasing amounts of CO2 into the atmosphere, but most climate models don’t account for contributions from animals such as Atta cephalotes, which stir up the soil and release gases at a faster rate. To determine just how much CO2 leaf-cutter ant nests emit, Fernandez-Bou et al. spent more than 2 years monitoring 15 nests in La Selva Biological Station, a rainforest research station in northeast Costa Rica. Each study site included a leaf-cutter ant nest and a similar plot of nestless soil, where the team inserted stainless-steel tubes to collect gas at different depths and measured CO2 emissions from soils and nest openings.

They found that the amount of CO2 wafting from the ant nests and the surrounding soils was 15%–60% higher than from nearby nestless soils. Nest openings were the major source of this increase, with emissions up to 100,000 times greater than from control soil plots.

Overall, the team concludes, Atta cephalotes are likely responsible for 0.2%–0.7% of the CO2emitted from the neotropical rainforest. Globally, their contribution will likely increase because the leaf-cutter ants’ range is expanding as the climate warms, and the insects thrive in the increasingly disturbed, fragmented forests caused by human activities such as agriculture and grazing. Even though leaf-cutter ants may be responsible for a significant fraction of the CO2emitted by the forest, they also fix carbon underground, and nests are likely sinks of carbon while they exist. According to the authors, these findings could help inform studies of global carbon cycling, which have not previously taken the ants’ activity into account.