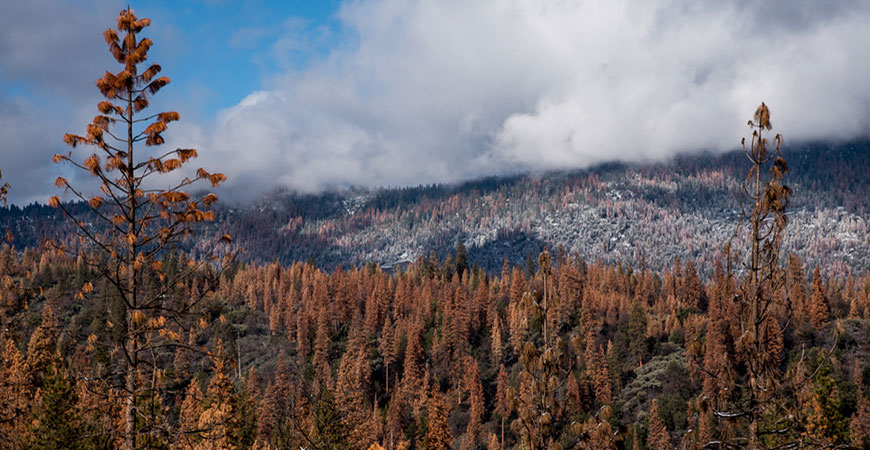 Many trees in the Sierra have died in the past few years because of drought.

UC Merced researchers have evidence that California’s forests are especially vulnerable to multi-year droughts because their health depends on water stored several feet below ground.

“Each year our forests, grasslands and shrublands depend on water stored underground to survive the dry summers, but during multi-year dry periods there is not enough precipitation in the wet winter season to replenish that supply,” said Joseph Rungee, UC Merced graduate student and lead author on a new paper published in the journal Hydrological Processes.

Trees typically need about the same amount of water every year — more in hotter years. During a drought, that subsurface store of water is gradually depleted, causing stress to trees and other vegetation. If the drought is long enough and especially hot, as was the case from fall 2011 through 2015, large numbers of trees run out of water and die.

By analyzing data from the National Science Foundation’s network of Critical Zone Observatories, Rungee worked with UC Merced Professor Roger Bales, with the School of Engineering and the Sierra Nevada Research Institute, to get a better understanding of where and to what extent the below-ground weathered bedrock provides multi-year drought resilience. The researchers delved into data from sites across the semi-arid West to determine the amount of water storage available in the root zones of different areas.

Bales, Rungee and their colleagues wanted to know how dependent different areas in the West are on that subsurface water storage and how many dry years the plants can survive.

Some areas will be able to tolerate one or two years, while others can weather five or six. However, when the weather is hotter, the plants need more water to live, and the climate is getting warmer.

Bales explained that areas with Mediterranean climate, such as California, are especially vulnerable because of their climate variability, even though they have considerable subsurface storage. Areas with year-round precipitation, such as Colorado, are vulnerable, too, because they have less subsurface storage, even though their year-to-year precipitation is less variable than California’s.

“Usually the year-round precipitation would see those areas through drought years, but longer, hotter droughts are going to pose more problems,” Bales said.

“In some ways we’re more vulnerable than areas with year-round precipitation because we depend on the storage so much,” he said. “In California, more than half of the water use by forests, grasslands and shrublands comes during the dry season, and it comes from water stored in the root zone after rainfall and snowmelt end in spring.”

In contrast, less than one-third of water used by vegetation at sites they studied in Colorado, New Mexico and Arizona was drawn from subsurface storage during dry periods.

At one southern Sierra forested site, Rungee determined that the amount of water that trees drew from below ground during the 2011-15 drought is equivalent to that stored down to a depth of at least 25 feet below ground.

One next step is to extend the calculations done by Rungee at research sites across the West, where the water balance can be accurately measured using satellite data, calibrated with detailed ground data.

“This will provide a projection of relative drought vulnerability, which is especially of interest to land managers who need to prioritize where to thin overstocked forests before they suffer further widespread tree mortality during the next multi-year drought,” Rungee explained.

The key to forests surviving the next drought is to strike a balance between water use by the forest and the amount of over-year subsurface water storage that is available to make up for low precipitation during drought years.