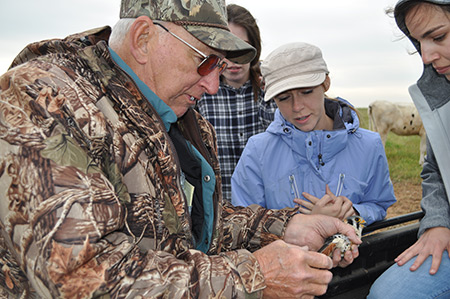 Kestrels are a fixture among the birds on the Merced Vernal Pools and Grassland Reserve adjacent to campus.

Though they are not endangered, the small falcons’ population has declined by 60 percent in California over the past half-century because of changes in land usage.

Nesting-box programs like the one on the reserve and others around the Central Valley are helping the kestrels reproduce safely. The boxes also help UC Merced researchers like Joy McDermot — the first at UC Merced to study the reserve’s birds and a recent master’s recipient — discover more about the little birds of prey and the lives they live.

“Kestrels used to be very common, so it’s alarming to see this population loss since the 1960s,” McDermot said. “We want to better understand what’s happening with the population on the reserve.”

In developing the master’s thesis she defended in December, McDermot aimed to learn more about what the kestrels eat and feed their young, and about how the man-made nesting spaces are affecting breeding productivity. The reserve’s nesting-box program started in 2014, providing three years of results to look at so far. McDermot’s research shows the program offers effective nesting sites, and it will continue.

“The kestrels are doing OK despite the drought, especially when compared with non-drought areas,” McDermot said. “But we are losing more nestlings to predators like the raccoons that linger on the canal banks around campus. Once they figure out there’s food in the nest boxes, we have an excellent example of a predator-prey relationship.”

The small birds are also tempting for gopher snakes and other birds of prey. 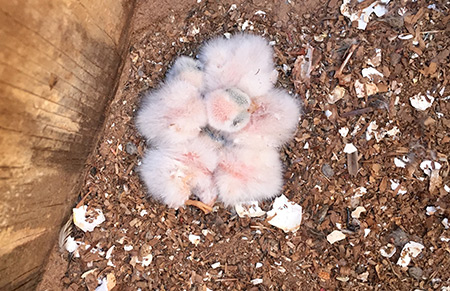 McDermot earned her bachelor’s in biology at California State University, Stanislaus, before becoming an Environmental Systems student through the School of Engineering under former UC Merced Professor Marilyn Fogel.

She spent a good portion of her research time since 2015 on the reserve, working with and around the birds, gathering samples of feathers and the leavings in the nest boxes.

“I knew I wanted to work in ecology, but I never imagined I’d be doing this — handling small birds like this,” she said. “But it has been a great program and a great experience.”

The reserve has 30 nest boxes, and McDermot found that the average occupancy is 60 percent during breeding season, from March through the end of June. Overall, the birds had more success in breeding in 2015 than 2016, but 2016 saw more success among females attempting to hatch a second clutch of eggs than in 2015.

The campus has a professional bird-bander, Steve Simmons, who tags birds on the reserve for tracking and study. McDermot worked closely with him for her project, and they discovered that some of the kestrels that had been in the reserve’s nest boxes in 2015 returned in 2016, too.

Part of McDermot’s study looked at the kestrels’ diets. By using the stable isotope instrumentation in Fogel’s lab, she analyzed the elements in feather samples, looking at the amounts of elements such as nitrogen, hydrogen and carbon. She found that insects, spiders and small birds — such as horned larks — make up a large portion of the food consumed by both adults and nestlings.

“The stable isotope analyses provide data for quantifying the importance of each food source to the reproductive success of the kestrels,” Fogel said. “Having an in-house stable isotope facility available for hands-on use by UC Merced’s graduate students not only provides scientific information, but trains students on how to use complex instruments for solving ecological problems.”

McDermot found some interesting eating habits among the birds.

“Early in the season, 90 percent of the diet of the birds in the nest boxes was spiders,” McDermot said. “Later in the season, that becomes grasshoppers.” Grasshoppers are important for developing fledglings and adult birds because of their high protein content. McDermot said spiders, which have less protein, might only be part of the birds’ diets because spiders are abundant and kestrels are opportunistic eaters.

One of the most important parts of her research, McDermot said, is that it adds to the body of knowledge about the birds. She encouraged other UC Merced students to reach out to Reserve Manager Monique Kolster to see how they can help with conservation efforts.

“I hope people will take notice of the nest boxes because they are right there, close to campus, and become interested like I did,” she said. “There are lots of ways to get involved.”