Skip to content Skip to navigation
Ramping up to fall semester: Learn how to do your part as we return to campus, and get the latest COVID-19 updates.Campus ReadyCOVID-19 Updates
UNIVERSITY OF CALIFORNIA, MERCED

Fifty years ago this year, while a freshman faculty member in the University of Chicago Physics Department, Roland Winston published a paper introducing a new field he called nonimaging optics. 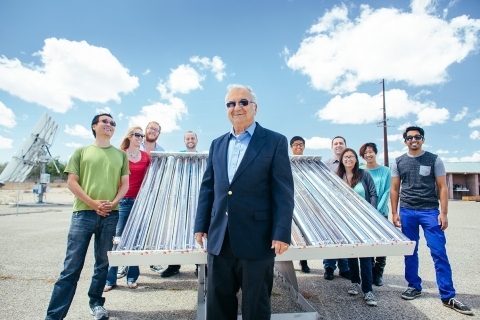 Professor Roland Winston and some of his team at UC Solar.

In it, he described the compound parabolic concentrator (CPC), a highly efficient device that collects and concentrates light, and introduced “Winston Cones,” non-imaging light collectors that by their design maximize the amount of light that can be focused from large areas into smaller photodetectors or photomultipliers.

Because of the publication, Winston is widely considered to be the father of nonimaging optics, a field concerned with the optimal transfer of light radiation between a source and a target.

Winston’s 1966 work for the department he would eventually lead became the foundation for all solar-concentrating research that has followed.

As the UC Merced campus community knows, Winston is a distinguished professor of physics and engineering here, a founding faculty member and the director of the University of California Advanced Solar Technologies InstituteOpens a New Window. (UC Solar).

To celebrate the golden anniversary of this discovery, Winston was recently honored with a VIP dinner at the SPIE Optics + Photonics conference in San Diego, the largest international, multidisciplinary optical sciences and technology meeting in North America.

“Most scientists are grateful to generate worthy incremental progress in their fields. Only a select few succeed in inventing and advancing a fundamentally new scientific discipline, and Roland Winston is among them,” colleague Jeffrey Gordon said. “His landmark 1966 article opened the field of nonimaging optics, and his subsequent papers — to this day — forged a broad and rich scope of basic conceptual and applied advances in areas as diverse as solar energy concentration, illumination optics, infrared technology, fiber-optic coupling, biomedical treatments and elementary particle physics.”

Gordon, a professor with the Department of Solar Energy and Environmental Physics at Ben-Gurion University of the Negev in Israel, organized the dinner to recognize the contributions his friend and mentor has made.

He credits Winston’s studies with inspiring and motivating scientists from around the world to conduct their own pioneering research.

For example, the research team at Sudbury Neutrino Observatory (SNO) in Ontario, Canada, shared the Nobel Prize in Physics last year for an experiment that uses 10,000 Winston Cones.

Today, Winston’s nonimaging optics work forms the basis of the solar concentration research going on in the UC Solar lab. It is integral to the design of concentrating systems for photovoltaics, solar thermal and combined PV-thermal systems. Projects under development include non-tracking, low-cost solar thermal collectors that achieve temperatures in excess of 200 degrees Celsius; concentrating photovoltaic systems that take advantage of high-performing multi-junction solar cells; and tracking hybrid systems that achieve both high electrical output and enhanced thermal performance.

“It's hard to believe that what started 50 out years ago as a research paper has become even more relevant today with the advent of solar energy and the need for the world to move to greener, more sustainable, sources of energy,” Winston said. “I am very pleased and humbled to have made such a lasting contribution to so many important industries, and I am excited to see all the new research in nonimaging optics that's being conducted by my students, former students and others across the globe.”