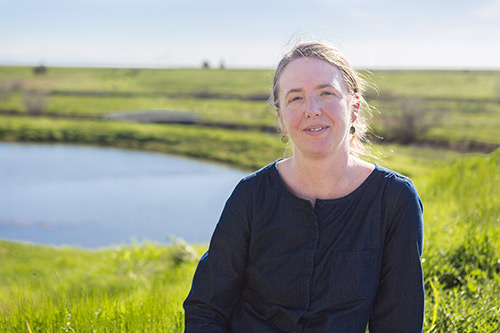 Many studies have shown that raising cattle and pigs for food is hard on the environment, and fish has long been considered a better alternative.

But the work of UC Merced graduate student Brandi McKuin indicates that because of emissions, fishing for large fish like tuna warms the climate just as much as raising pork, pound for pound.

McKuin’s work suggests that despite a shift toward “cleaner” practices, the fishing industry is a far greater contributor to climate change than previously thought, and that shift could have its own negative consequences for the Earth.

McKuin, an environmental engineering student working toward her Ph.D. with Professor Elliott Campbell in the School of Engineering, recently published “Emissions and Climate Forcing from Global and Arctic Fishing Vessels” in the Journal of Geophysical Research: Atmospheres.

Her paper says the fishing industry contributes to climate change by using diesel fuel, which emits carbon dioxide that persists in the atmosphere for hundreds of years. Boats also produce other short-lived pollutants, such as sulfur oxides and black carbon, a kind of soot resulting from incomplete combustion.

“Fishing vessels were recently found to be the largest source of black carbon ship emissions in the Arctic, suggesting that the fishing sector should be a focus for future studies,” McKuin wrote.

Previous studies generally underestimated emissions of short-lived “climate forcers,” she said, because they weren’t accounting for small fishing vessels or the variability in emission factors.

“In particular, global black carbon emissions were underestimated by an order of magnitude,” she said.

McKuin has served on the scientific advisory board of the Monterey Bay Aquarium’s Seafood Watch program with Campbell, and said a review of the group’s own sustainability standards prompted her to look into the topic.

“People often look at the data from either the life-cycle-analysis community’s perspective or the atmospheric science perspective,” she said. “But Professor Campbell has his feet in both areas, so we took an interdisciplinary approach to the questions.”

The life-cycle analyses often only looked at well-mixed greenhouse gases, such as carbon dioxide, methane and nitrous oxide, while the atmospheric analyses overlooked the more than 1 million smaller fishing vessels. McKuin estimated emissions by combining catch records with the amount of fuel typically needed to catch different species, which allowed her to calculate the amounts of pollutants.

“We brought together the literature from different disciplines to improve the emissions and fuel estimates, and to provide the first seafood life-cycle assessment to include the climate impact of short-lived climate forcers (factors that bring about unnatural change),” McKuin said.

McKuin also looked at the climate implications of policies to reduce nitrous oxide and sulfur dioxide emissions, and found that the climate cooling effects of those two pollutants has been reduced.

The gases, as harmful as they are, actually counteract the warming effects of the black carbon, which poses a dilemma for policy makers whose goals to improve air quality are at odds with goals to reduce climate forcing.

“The overlooked climate impact of these emissions should be a real eye-opener for seafood and other industries too,” Campbell said.