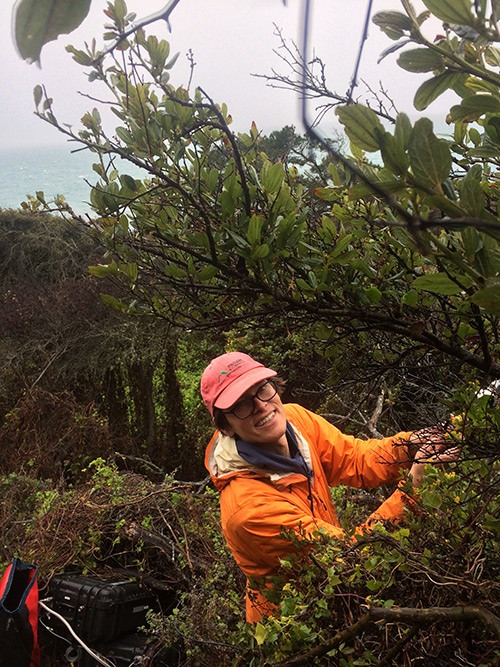 Most Americans have probably seen gorgeous photos of fog winding its way through California’s coastal redwoods. The trees are one of the state’s most prominent icons, drawing more than 2 million visitors a year.

But at a time when rising sea levels, melting polar ice, droughts and superstorms are the most visible indicators of climate change, people might not readily think about the fog.

Named The Summen Project, after the Native American word for “redwood,” the $1.75 million, three-year study is part of NSF’s Coastal Science, Engineering and Education for Sustainability (SEES) program, a $13 million push to study coasts around the world.

“The trees depend on water to survive, and that’s fine when it rains in the winter, but during the dry summers the trees likely rely on fog,” said project leader Elliott Campbell, a professor with UC Merced’s School of Engineering. “The big problem is that fog is on the decline, and that might be due to climate change and expanding urban heat islands.”

Interactions between redwoods and the physical environment have received relatively little attention, though, mainly because until recently, models couldn’t simulate the fog that creates the link. That made it difficult for researchers to interpret historical observations or to project climate change impacts on redwoods.

The fog itself also gets in the way by obscuring fundamental ecological measurements, making it difficult to understand how the redwoods will respond to changes in fog.

“The trees and how they function are literally enshrouded in fog,” said Mary Whelan, an NSF postdoctoral fellow at UC Merced who is working on the project. “Leaves are covered in tiny openings that let air in and out. Normally, we could measure how much water is escaping the leaves to see how well the tree is ‘breathing.’ But the mist puts a damper on traditional methods.”

It’s important to understand the fog-mediated vulnerabilities of the coastal ecosystems in part because by 2025, it’s estimated, 75 percent of humans will live near coasts. If current population trends continue, crowded U.S. coasts are projected to see populations grow from 123 million people to nearly 134 million by 2020.

While the project will provide information about coastal redwood resilience and establish a foundation for future work, it will also investigate whether learning about climate change impacts to the iconic redwoods can influence people’s perceptions of climate change.

“We believe that, when people learn about climate-related impacts to a species that is particularly iconic — in this case, the coastal redwoods — their perceptions of climate change will become more salient, personal and pressing,” project co-leader Stanford Professor Nicole Ardoin said. “As a result, their interest will be piqued and their climate-related behaviors may be influenced, as well.”

The scientists don’t plan let the research results be hidden away in obscure archives, either. They’ll host a series of stakeholder meetings with nongovernmental organizations, park employees and land managers, including staff members from the California Natural Resources Agency.

“We are very pleased this grant has been made and that we were supportive in the application process,” Secretary of the California Natural Resources Agency John Laird said. “California redwoods are not just an iconic part of the state experience — they are a bellwether for the impact of climate change on California. This study will help us understand the changing health of the redwoods and suggest possible steps we can take to protect the health of the trees.”

The Summen Project is also under the umbrella of the UC-wide Institute for the Study of Ecological and Evolutionary Climate Impacts (ISEECI), formed through UC President Janet Napolitano’s Research Catalyst Awards. Led by UC scientists, ISEECI coordinates studies for understanding — and potentially mitigating — climate impacts. Researchers, including at least 10 from UC Merced, use the 39-site UC Natural Reserve System as a living laboratory to study the effects of climate change on California ecosystems.