Pine Bacteria Getting a Closer Look From Scientists 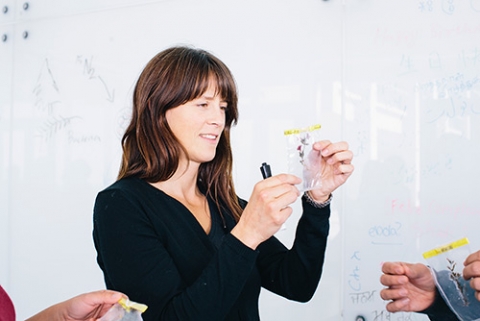 Professor Carolin Frank’s research into the nitrogen-fixing properties of bacteria inside the needles of some high-elevation pine trees is the topic of a new paper in the journal New Phytologist.

Frank, with the School of Natural Sciences, won a $1.6 million, four-year grant from the National Science Foundation (NSF) in 2014 for her work on foliar endophytes.

“Evidence for Foliar Endophytic Nitrogen Fixation in a Widely Distributed Subalpine Conifer” is the first publication to come from that research.

Some old-growth coniferous forests have more nitrogen in their soils and vegetation than can be explained by known sources, Frank and her colleagues explain in the paper. That limits researchers’ ability to understand and predict carbon and nitrogen cycling across about 15 percent of the Earth's surface.

In the past few years, Frank discovered a novel symbiosis between pines and the bacteria inside their needles. She and her collaborators, including UC Merced postdoctoral researcher Andrew Moyes and project scientist Lara Kueppers, demonstrated that the enzyme responsible for fixation of atmospheric nitrogen, called nitrogenase, is active inside the needles.

That was a surprise because only bacteria associated with a few forest plants, such as legumes and alders, and free-living bacteria in soil were known to do this.

However, Frank and her colleagues still need to figure out which species of bacteria fix the nitrogen, and if they transfer it to the plants.

The researchers are using DNA probes in hopes of finding a match and being able to identify the microbes.

Frank’s discovery and the subsequent research could help solve an ecological mystery: Where does all the nitrogen in forests come from? The endophytes could be one source.

A better understanding of the microbes that fix nitrogen inside non-legume plants could help reduce fertilizer use and improve forecasts about climate change.

Frank studies limber pines. The trees are slow growing, but can live 1,000 years or more. They are commonly found from Alberta, Canada, to New Mexico, including eastern California, between 2,800 and 12,500 feet in elevation.

She has new undergraduate and graduate students in her lab who are excited to get out into the field and start sampling.

“We’re going to work in Yosemite to see if the microbe community changes with the seasons,” Frank said.

She’s working with Kueppers and Jennifer Pett-Ridge, researchers with the Sierra Nevada Research Institute and the Lawrence Livermore National Laboratory, respectively. They plan to learn what’s going on with the bacteria at the sub-cellular level through stable-isotope microscopy.

“We don’t know what these bacteria need — we can’t see them and we can’t grow them in the lab,” Frank said. “The bacteria that we can grow, we know a lot about. But there is a huge diversity of bacteria and the functions they perform, and we don’t know a lot about that. We don’t even know how they get into the pine needles. There are many mysteries in microbiology.”