Eat, Hydrate and Learn at This Year’s Earth Day Event 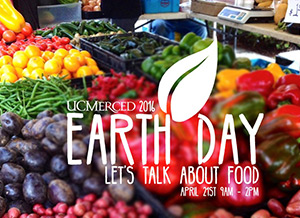 Most people probably don’t think about food when considering how to celebrate Earth Day.

But the UC Merced Student Sustainability Council wants to help people understand how what we eat and where it comes from is connected to sustainable living. That’s why food is the theme of this year’s Earth Day celebration on campus.

“Food is a topic that touches every one of us,” said student sustainability leader Hoaithi Dang, a UC Global Food Initiative fellow. “It’s not just sustainability; food is cultural, and it relates to the community.”

This year’s Earth Day festivities — to which everyone is invited — will feature food in different ways.

“We hope these will get some conversations about food going,” Dang said.

Six area farmers will sell their homegrown produce at a farmers market, as well. And because food security is a growing concern among students, Vernette Doty and the Office of Student Life will helm an information booth where students who need them can sign up for food stamps.

But the days isn’t only about food — this year UC Merced Recycling will conduct a demonstration about garbage sorting to make sure people have a better understanding of what can be diverted from landfills.

The upper half of campus now diverts 80 percent of its trash from area landfills, sending it instead to recycling or composting.

“The best thing people can do is to stop buying landfill material. Check the item first and if it can’t be recycled or composted, don’t buy it,” Recycling intern Laura Hanel said. “Additionally, taking as little as three seconds to sort your trash at the waste stations provided around campus is not only helpful to the university, but to the environment at large. People sometimes forget that much of the landfill waste could have been recycled or composted had they just thrown it in the right bin.”

Like last year, every freshman will get a reusable water bottle designed to commemorate the Class of 2019. Those with reusable bottles are encouraged to use the campus’s 13 hydration stations to refill them.

Another new development this year is the launch of the EcoRep program, the first student-led, university-backed organization to deal with sustainability on a macro-level.

“Our focus is to educate peers and housing residents about sustainable behaviors that benefit our community and environment and to encourage environmental behaviors in the ways of resource and waste management, energy efficiency and other topics related to sustainability,” said Elizabeth Arguellez, an EcoRep coordinator with the Office of Sustainability. “We are working to create an on-campus presence, and are debuting our first YouTube video before the Earth Day event.”

Future plans for the EcoReps — think of them like sustainability-focused resident advisers — include working on the campus garden, encouraging zero-waste events with Waste Reduction and Recycling Coordinator Matt Hirota, and partnering up with Housing and Resident Life.

The EcoReps will have a booth at Earth Day focusing on up-cycling — repurposing old items or waste. For example, wine corks can become mini-containers for succulent plants, old T-shirts can be turned into tote bags and recycled paper can be used to create coloring books — a form of student therapy before finals, Arguellez said.

That’s just one of the nearly 20 student, community and governmental tables that will sponsor activities, give out information and talk to everyone who’s interested about sustainability and taking care of the Earth.

About 200 students so far have engaged as “eco-champions” in a Facebook campaign, but Dang, like many others on campus, talks about the need for an enhanced campus culture of sustainability in which everyone can make a few small changes that make UC Merced even greener.

The first Earth Day took place April 22, 1970, and is widely credited with launching the modern environmental movement. The passage of the Clean Air Act, Clean Water Act, Endangered Species Act and many other environmental laws followed.

Earth Day, now organized by the Earth Day Network, has grown into a global event in which more than 1 billion people in more than 150 countries participate — the largest civic observance in the world.

Though Earth Day is still officially recognized on April 22, many communities hold their celebrations on the days during that week that make the most sense for getting the largest turnout. UC Merced chooses the Thursday of that week because that is campus’s most populous day of the week.

Dang said he and the executive council, including Isabella Beltran, Adriana Gomez, Yazmin Lommel and Hanel, as well as they nearly 20 other organizers from the student committee are all looking forward to a big, interactive event.

“Earth Day celebrations here have always been really engaging, and they are growing every year,” he said. “We had about 1,000 students at last spring’s Earth Day, and about 1,500 actively participated in the fall EcoFest, so we’re anticipating even more for this event. I am sure this is going to be the best Earth Day yet.”