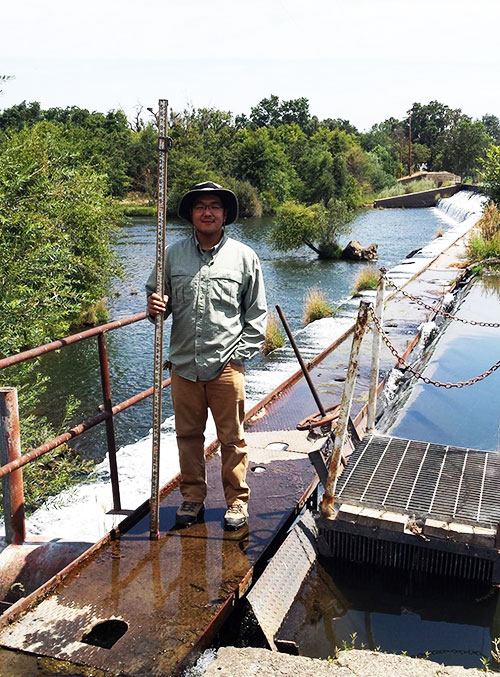 Stephen Ho’s experience at UC Merced helped him land an internship with E. & J. Gallo Winery in Livingston shortly after his graduation in 2012.

His engineering expertise, passion for the environment and innovative spirit — all cultivated on campus — helped him make an immediate impact on the company’s operations.

Charged with managing waste from the winery’s grape processes, Ho took things a step further — instead of grinding the waste down and selling it to farmers as cattle feed, he fed it to microbes in an anaerobic condition, generating biogas that can be harvested to create electricity. Gallo incorporated what it learned from Ho’s pilot project into its new Livingston Water Innovation and Energy facility.

“Since high school I was part of an environmental club,” Ho said. “I knew that I wanted to do something with the environment when it was time for me to work.”

Ho arrived in Los Angeles from Indonesia at the age of 15 and soon observed that most Americans take natural resources for granted. He feared what will happen when the nation’s supplies of water, oil and other necessities run out, and decided to get involved. In 2009, he headed to UC Merced to pursue an environmental engineering degree. The campus was his first choice for college due to its small size, access to faculty members and commitment to the environment.

During his sophomore year, Ho began research into soil properties and water retention in the high Sierra meadows with Professor Asmeret Asefaw Berhe through the Yosemite Research Experience for Undergraduate (REU) program funded by the National Science Foundation. He later changed his focus to remote sensing research with professors Teamrat Ghezzehei and Qinghua Guo.

“The hands-on part of my time at UC Merced allows me to boast to interviewers what I did at school,” he said. “You can say, ‘I worked on project A,’ and describe exactly what you did, what you learned and what hardships you got through.”

With the guidance of the engineering dean and faculty members, Ho and a couple of friends started a chapter of Engineers for a Sustainable World (ESW) at UC Merced. He worked on projects like the campus’s community garden and petitioned to get the first hydration station installed on campus to reduce the number of plastic water bottles used. The campus now has 27 such stations.

When his six-month internship with Gallo was completed, Ho returned to Los Angeles to search for a job in his field and take the engineering training test administered by the Board for Professional Engineers, Land Surveyors and Geologists. However, he found himself pulled back to the San Joaquin Valley when Gallo sought him out for another project.

His second internship within Gallo’s operations group was focused on maximizing product yield, producing as little waste as possible.

“We generated charts for operators to share best practices from shift to shift, and helped them visually see how each action affects the machine,” Ho said. “We saved a little more than $4 million worth of product over the 2013 Harvest season.”

Ho then entered an internship with the Merced Irrigation District (MID) working as a water resources engineer digitizing 30,000 cross-section points on MID’s 825 miles of canals for a water model the district was developing.

He proved his value and secured a full-time position as a Supervisory Control and Data Acquisition (SCADA) technician for MID’s engineering department overseeing water management instrumentation.

Part of his job is to make sure instrumentation — sensors, gates and radios — are operating properly so MID can deliver water to the farmers, and act as an early warning system in case of flooding.

Ho’s is also putting his UC Merced experience to work as a contractor for Envirogen, a company tasked with maintaining a portion of Gallo's water treatment plant.

“Studying at UC Merced certainly helped me be more critical of things,” Ho said. “The things you learn in class might not always be directly applicable to your future career, but the thought processes and the way you interact with people all carry across and become helpful.”