Note: This story originally ran in the Fall 2015 issue of UC Merced Magazine.

California, long envied by the rest of the country for its climate, beauty and natural resources, is four years into a drought and in the midst of a water crisis a century in the making.

With Gov. Jerry Brown imposing mandatory water restrictions on residents, the state’s staggeringly complex water woes have taken the sheen off at least some of the California dream. 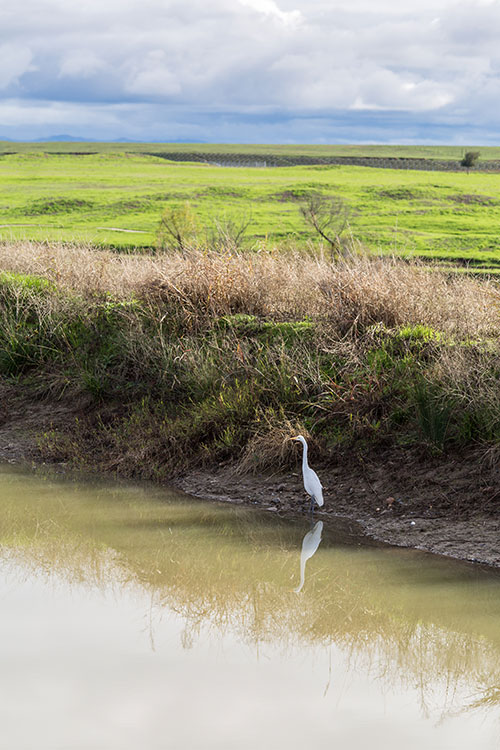 But researchers at UC Merced are trying to unravel the Gordian knot that is California water through a new inter-campus initiative.

The new UC Water Security and Sustainability Research initiative, known as UC Water, is led by UC Merced professors Roger Bales and Joshua Viers and involves researchers from other campuses. One of the goals is to amalgamate research on infrastructure, institutions and information — what Bales calls the three Is of water security.

Researchers want to integrate information on headwaters and groundwater to see how changes affect the downstream groundwater. UC Water also intends to provide information and offer ideas that could be implemented by resource managers for a more secure water future for the state and beyond.

One of the biggest questions is how the state, with a population increasing by a million people a year, can meet insatiable demand for water for irrigation for food production, for recreation, for fisheries and more. Demand peaks when it’s hot, which is not, typically, when it rains.

Meeting demand is only more difficult as the climate warms, Viers said.

“We don’t live in a place of continuous plenty,” Viers said.

By gathering data showing where the water is, and where and how much water is needed, Viers and his colleagues hope to help put the state’s water and how it’s managed on a sustainable path.

As Viers said, “You can’t manage what you don’t measure.”

The causes of California’s water crisis are many, from a lack of naturally occurring snowpack in the Sierra Nevada and drained underground aquifers to an oversubscribed and antiquated water-rights legal system.

The ramifications are numerous as well.

Drier conditions can result in more frequent and severe wildfires. Developed land and natural habitat is much more susceptible to flooding when it rains. And millions of homeowners, farmers and other citizens are forced to pay higher and higher prices for utilities and irrigation systems.

“Opportunities exist for all sectors to better use and manage water,” Viers said.

Fortunately, there are a multitude of technological and political solutions to the problems that are worth pursuing. UC Water’s role is to explore those solutions and their feasibility.

Up in the Mountains

Part of the problem is that what needs to be managed is not measuring up.

“Typically there would be feet of snowpack. Last year, we had just a couple inches,” Bales said. “That’s a problem, because the Sierra Nevada is where a lot of our water comes from.”

In fact, an estimated 60 percent of the water stored in California’s reservoirs — many of which are under capacity or empty — comes from the snowpack that (ideally) accumulates each winter and becomes runoff in the spring and summer.

Professor Martha Conklin and Bales are among those who study the changing snowpack and rising snowlines in California’s mountains.

Conklin is the lead water researcher on the seven-year Sierra Nevada Adaptive Management Project (SNAMP). Along with Bales and others at UC Merced, she has studied the issue in the American River Basin and in forests near Yosemite and Tahoe.

The experiments SNAMP used were designed to evaluate forest response to strategically placed “treatments,” or thinnings, focused on reducing the risk of high-intensity fires.

But the researchers also suspect that restoring forests to the densities that were standard a century ago — before fire suppression measures were put in place — could yield up to 1 million acre-feet of water across the Sierra Nevada in a normal-to-wet year.

“Using models calibrated by years of data, we were really pleased with the results, because they showed that even with a light treatment — removing 10 percent to 15 percent of the biomass — we actually did have measurable increases in water responses,” Conklin said. “That’s exciting because it means where you treat makes a big difference.”

The researchers don’t propose ridding forests of all the undergrowth, rather restoring sustainable forest densities, which would also help control the intensity of wildfires.

“Not only are low-intensity fires necessary to forest health, they are managed differently,” Bales said. “Land managers’ funds are often limited because of the resources expended in fighting high-intensity fires and their subsequent cleanups. They don’t have enough resources for restoration projects.”

The issue requires further monitoring and verification in order to guide investments in forest management by the water community.

“You have to show the benefits and assign numbers,” Bales said. “How much more runoff can you get and can you sustain that?”

University researchers also study current and future effects of a warming climate. For example, Bales has found that as the climate warms, trees have longer growing seasons at higher elevations.

That means “we could lose our water gains from forest thinning at lower elevations, because the trees will use more of the water,” Bales said.

In the Southern Sierra Critical Zone Observatory near the Kings River, researchers also found that the longer growing season meant more water was being transpired into the atmosphere, too, said Professor Steven Hart.

“That means less water stored in the soil,” Hart said.

Expanding a project Bales, Conklin and others have been working on with the California Department of Water Resources could confirm that unknown.

They developed a system of wireless ground sensors that monitor soil moisture, snowpack and the whole water cycle, and deployed it in the American River Basin.

The system could replace the old method the water agency used of measuring the snowpack at the same selected spots each year and using those numbers to project the year’s runoff.

“That doesn’t work well in very dry or very wet years,” Conklin said. “We’re collecting data every 15 minutes about the spatial variations across the whole area, which provides a much clearer picture of where the snow is and how it is melting, and offering daily, real-time information.”

Bales said if the state invested $100 million to $200 million in a unified, statewide system of sensor networks, it would have immediate and sustained payoffs by reducing uncertainty about how much water the state has and where it is.

“We’ve shown that it can be done,” Conklin said.

Down in the Valley

It seems counterintuitive, but another project has shown the benefits of moving levees so rivers seep in and recharge aquifers.

Restoring floodwaters’ access to floodplains in some areas can help replenish groundwater supplies and improve salmon fisheries, according to the results of a project along the Central Valley’s Cosumnes River near Lodi, Viers said.

After four years of study, levee setbacks were found to have reduced flood magnitude, allowed for agricultural production and — at three times the normal rate — recharged the local aquifer.

UC Water, again using water-sensor technology, bolstered the state Legislature’s recent decision to invest $660 million in rebuilding levees to make room for floodwaters and add to local groundwater stores instead of waiting years for the runoff from precipitation to do the same job.

“In the Central Valley, we’re overdrawn by more than 100 million acre feet. It is like having 25 Lake Shasta-sized reservoirs completely drained and not refilling,” Viers said.

Until last year, when the California Legislature passed the Sustainable Groundwater Management Act, groundwater usage was neither measured nor regulated.

Only recently did the state start releasing information about the geologic substrate and depth to the water table. And while groundwater usage remains largely unknown, a more than 100-year-old system of allocating rights to surface water is a regulatory nightmare.

In the San Joaquin Valley, the allocation is closer to 10 times the actual water supply.

And California, more often than not, does not have “good” wet years.

The disparity could be higher because Viers’ analysis didn’t take into account water rights given out before 1914 and grandfathered into the current system.

“In any case, the numbers alone show the water-rights system doesn’t match the demand and availability,” he said.

Viers, director of the UC Merced branch of CITRIS and a member of the Public Policy Institute of California Water Policy Center, hopes his work helps bring about reform.

“Many of our problems are political ones in the end, but without making measurements in all facets of water – how much water is being used by whom for what purpose – we won’t be able to manage our future,” he said.

Multiple levels of additional bureaucracy, in the form of local water management districts and state agencies that are alternately concerned with water quality and quantity — mandates that often put them at loggerheads with one another — complicate matters further.

Scientific data like that being produced by UC Merced researchers will ultimately provide a means to a more sustainable future.

“The next step is collecting better data so we can make better decisions,” Viers said.