Sun and Salt: How Solar Tech Can Help California’s Drought 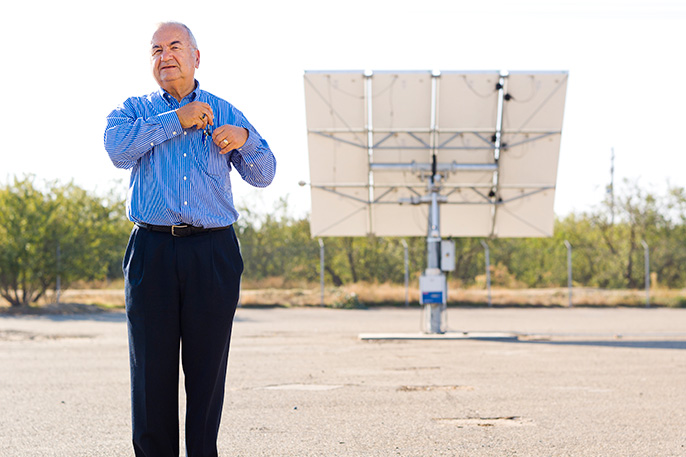 In the midst of California’s ongoing drought, researchers at the University of California Advanced Solar Technologies Institute (UC Solar) at UC Merced are turning to an unlikely ally to help solve the problem of water availability for California’s farmlands: the sun.

“Any adoption of solar technology will help with climate change in the long term, because it reduces our use of fossil fuels,” UC Solar Executive Director Ron Durbin said.

But UC Solar’s latest project, which will be presented at the upcoming 2015 UC Solar Research Symposium in San Francisco, aims to show that solar technology can be of short-term help as well, by making water desalination cheaper, more accessible and cleaner.

With severe water shortages affecting California agriculture, farmers are increasingly using reclaimed irrigation water. This approach conserves water, but it comes with a problem: salt. Any use of irrigation adds salts to the soil, and each time water is reused, it gets dirtier and saltier — a problem only exacerbated by the widespread use of fertilizers.

The need for a solution is becoming more urgent. Salinization is a growing problem worldwide, not just in drought-affected California. The United Nations University’s Institute for Water, Environment and Health estimates that 5,000 acres of previously productive farmland are lost every day to salinization around the world.

In California, the effects of salinization are felt most acutely in the San Joaquin River basin and the Tulare Lake basin where drainage is limited.

“Desalination is going to have to be part of a sustainable water future for California,” UC Solar Director Roland Winston said. But while there has been talk of using desalination for years, there hasn’t been widespread adoption in the farming community.

“Previously it has been too expensive to set up, and you have the further problem of what to do with the waste,” Winston said. “You can’t just put the desalination waste stream back into the environment, or you are just exacerbating the problem of salt accumulation.”

No desalination system is perfectly efficient.

“You end up with a lot of salt and a lot of water as well,” Winston said.

Historically, salty wastewater in inland areas has been dealt with using an old-fashioned solar approach: evaporation ponds. But ponds are slow, inefficient and potentially hazardous to the environment and wildlife.

In the early 1980s, high selenium concentration in ponds in the Kesterson National Wildlife Refuge, caused by irrigation drainage water, led to birth defects and deaths in migratory birds and prompted wildlife officials to close and seal the refuge’s ponds.

Commercial evaporation systems have been widely used by industry for the treatment of wastewater, but existing technology is energy-intensive and reliant on fossil fuels.

The XCPC system has been in use since 2011 in UC Merced’s Solar Cooling Demonstration Project, powering air conditioning on structures at the Castle Research Facility, and is also being used to heat buildings at the Mongolian National University.

“Its non-tracking design enables it to be installed in any number of ways, including on rooftops and walls,” Winston said. “You don’t have this type of architectural flexibility with tracking thermal systems.”

Unlike other solar thermal systems that are available, the XCPC system is inexpensive, lightweight and works well even on hazy or partly cloudy days.

“Have you ever gotten a sunburn when you’re in the snow, even when it’s cloudy out?” Winston asked. “That’s indirect sunlight, some of which is reflecting off the snow — and it still has plenty of energy to give you a burn.

“Unlike ‘tracking’ solar systems, which only use direct sunlight, the XCPC is a wide-angle concentrator that also harvests indirect sunlight and turns it into thermal energy.”

In August, UC Solar was selected to receive a grant from the California Department of Water Resources to demonstrate a solar thermal-powered evaporation system, study its effectiveness in processing agricultural drainage, and assess its economic and environmental viability as part of a zero-liquid discharge system for drainage water reuse.

“The DWR project is exciting for many reasons,” Durbin said. “Desalination systems are getting better and better at harvesting clean water from drainage water, but you always have the problem of what to do with the discharge.

“Evaporating the remaining water content and harvesting the salts for potential re-use solves the discharge issue and also removes the salts from the environment. You end up with clean water and fewer salts in the ecosystem, which can be a win-win.”

Winston and Durbin see several clear advantages to using UC Merced’s solar thermal technology for desalination: It’s carbon-neutral, cheap, portable, highly scalable, and, unlike evaporation ponds, the solar thermal system can do its work in a controlled space, presenting no hazard to wildlife.

“The sun has been evaporating water for billions of years,” Durbin said. “All we’re trying to do is help it along.”