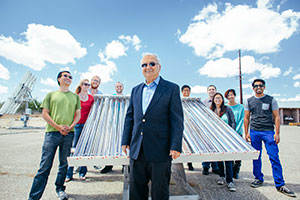 Professor Roland Winston has been tracking the Sudbury Neutrino Experiment since it began in the 1980s, because he invented the light collectors the scientists built to detect solar neutrinos.

“I just wanted to make sure they worked,” he said.

Last week, Winston learned with the rest of the world that the collectors not only worked, but were critical to the experiment that shared this year’s Nobel Prize in Physics.

“It’s a very important experiment,” said Winston, director of UC Solar and a founding faculty member at UC Merced. “Neutrinos are one of the more mysterious components of matter.”

Neutrinos are one of the fundamental particles that make up the universe, and are similar to electrons but don’t carry an electric charge. They are produced through radioactive decay; during nuclear reactions like the fusion inside the sun or the fission in nuclear reactors; when cosmic rays hit atoms; and in supernovae.

For many years, scientists thought neutrinos had no mass or weight, and struggled with ways to detect them. One scientist used large volumes of cleaning fluid to detect solar neutrinos, but the results were difficult to interpret, Winston said.

The scientists at Sudbury Neutrino Observatory (SNO) in Ontario, Canada, wanted a more direct and quantitative way to measure how many neutrinos come from the sun. They used “heavy water,” in which deuterium replaces hydrogen. Deuterium consists of a proton and a neutron, and neutrons are the ideal target for detecting neutrinos from the sun. They also built 10,000 Winston Cones, which Winston designed when he invented the compound parabolic light collector 50 years ago.

Using the Winston Cones, SNO researchers were able to detect neutrinos, prove the theory of how the sun makes energy, prove that neutrinos have some mass and prove that each kind of neutrino can transform into other kinds.

“Their research really sharpens our picture of how things work,” said Winston, who is both a physicist and an engineer and is affiliated with the schools of Engineering and Natural Sciences at UC Merced.

Provost Tom Peterson congratulated Winston, noting that Winston’s collectors have been critical to the Sudbury work. The scientists wrote several papers about the experiment, and in them, credited Winston and the Winston Cones.

“They were very generous to me,” Winston said.