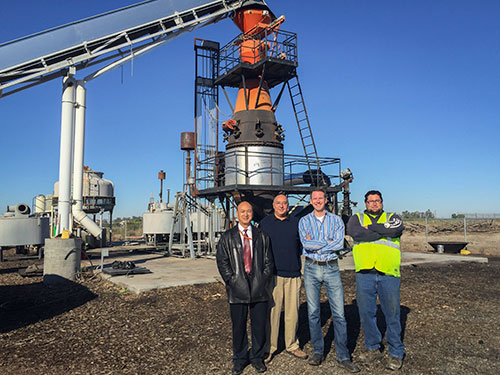 Professor Gerardo Diaz, with the School of Engineering, received nearly $900,000 through two grants: one from the California Energy Commission for the analysis and optimization of a 1-megawatt biomass gasification plant in North Fork, and the other from the U.S. Department of Agriculture to study a gasification byproduct for use in agriculture and air and water filtration.

Diaz and a group of industry experts are working on a new gasification plant in North Fork, a little town in the foothills between Merced and Fresno. It’s a $5 million project that aims to take biomass from nearby Sierra forests and, using a gasifier, turn the dead material into energy.

Diaz, who has years of experience with gasification, is helping make sure the plant runs as efficiently as possible and, using an array of diagnostic equipment and tools, will evaluate the plant’s performance and the gas that’s produced.

Gasification is a thermo-chemical conversion process that essentially “cooks” biomass in an oxygen-starved environment. Without sufficient oxygen, the material does not burn, but gives off a hydrogen-rich gas, while the biomass converted into solid carbon. The “syngas” given off in the process is cooled and cleaned, and can be used as a substitute natural gas to create electricity or liquid fuels.

“There’s a lot of biomass out there now, especially because of the drought and climate change,” Diaz said. “This gasification plant will cut down on the financial and environmental costs of transporting material that is removed, help with forest management and restoration plans, reduce the amount of fuel for wildfires, and create jobs and ancillary services in the region.

“Part of what is so exciting about the project is the collaborative effort,” he said. “No single entity could do this alone, but we have a group with people from the industry, from academia, biomass managers — all experts in different areas.”

The biochar is where the two UC Merced projects overlap. Diaz and his co-principal investigator, Professor YangQuan Chen, are working with partner Phoenix Energy on yet another use for the byproduct — as activated carbon for water and air filtration systems.

“Our biochar co-product is almost as valuable as the energy we produce,” said Greg Stangl, CEO of Phoenix, a Merced-based renewable-energy company and longtime UC Merced partner.

Most of his company’s demands for biochar as an agricultural product come from outside the state, but Stangl, Diaz and Chen aim to change that. Diaz and Chen said the demand will grow when incentives for water-efficient agriculture are implemented in California.

Right now, though, they want to take the gasification leftovers and make activated carbon. Nationally, public utilities and industry spend about $2 billion a year on activated carbon, mostly from Asian coconut shells or coal-based carbon.

Diaz, Chen and Phoenix received more than $300,000 from the USDA to find the right way to activate the carbon.

“Carbon activation is almost as much an art as a science,” Stangl said. “You have to engineer the microscopic pores in the carbon so they trap the particular molecules you want them to filter out.”

In homes, activated carbon is used in water filters such as pitchers or sink-enhancements, and also in fish tank filters, air purifiers, home air filters and many other applications. Industrially, it’s used by local water treatment districts for water cleanup and for removing foul odors from the air.

Phoenix has the gasification plants, and Diaz has the expertise. Chen is an expert in precision controls, and will help optimize the reactor that performs the biochar activation process using steam and heat.

“We have a research enterprise based around biochar, but it’s not just the research,” Chen said. “This has a potentially huge benefit for California. This could be critical to the sustainability of the Central Valley.”

Stangl said this project has many layers, including reducing dependence on imported activated carbon, creating jobs to boost the area’s economy and helping the environment, including the creation of renewable energy.

“That’s why this partnership with UC Merced makes so much sense,” he said.