While many young women her age are thinking about their favorite shoes or who they’ll go with to the winter formal, Callie Nance, 15, is thinking about her favorite science organizations and her future as a physicist.
That’s why the Dinner with a Scientist event at UC Merced last week was so perfect for her.
“Seeing all of these women — it’s a big thing for us to get out and see that there is so much more for us than just what we experience in Mariposa,” Nance said.
Nance and 55 other ninth- through 12th-grade girls from the Mariposa County Unified School District toured the campus and visited labs led by female scientists before sitting down for dinner with 14 women — some professors from UC Merced and some in science-related careers in the community — all of whom can be mentors and role models for the girls.
“I don’t know how else they would really hear about this,” retired community service officer and crime scene processor DonnaLee Hartman said. “That’s how I learned about my field — high school career day. The FBI came with displays, but I noticed there were no women in the pictures.”
“A lot of times, high school students have only vague ideas about what they want to do,” psychology Professor Rose Scott said. “That’s why it’s important for them to have contact with people whose careers are interesting to them. We can talk to them about how we got to where we are.”
Professor Jing Xu's work in biology drew many of the girls' interest. 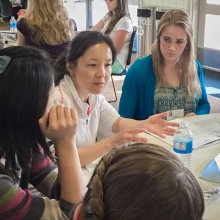 Last week’s event, hosted by UC Merced’s School of Natural Sciences, the Mariposa branch of the American Association for University Women (AAUW) and the Mariposa Youth Impact Project, is one of two dinner-with-scientist events held on campus each year. The other is hosted by the Merced County Office of Education and is co-ed, but this one was only open to girls.
Each participant applied and had to write about herself and her interests, and organizer Trish Gilger, who founded Mariposa Youth Impact Project, matched each girl with a scientist or a woman who works in science-related field, like Hartman. Each woman had a table of four to six girls, and was encouraged to bring artifacts, props, pictures, brochures or other materials to help describe what they do.
The girls got to meet with two scientists they are matched with, and this year, Gilger and other organizers added a third round in which each girl got to choose a third scientist whose work interested them.
Savanna Savage and Reese Radanovich, both 15, were initially matched with Sara Stock, a wildlife biologist with Yosemite National Park, because they are both interested in careers in veterinary medicine or working with wild animals.
Radanovich attended the event two years ago, and was excited to return.
“It really opened my eyes to how many different types of sciences there are that I could go into,” she said.
But she said she’d like to visit with Hartman because her work looked interesting, too.
The only man at the event was School of Natural Sciences Dean Juan Meza, who told the young women that the path to their futures isn’t necessarily a straight line, and that they should be open to options and lean on mentors like the ones they met at the event.
Professor Noemi Petra talked about applied mathematics with the high school students.

UC Merced participants represented the schools of Natural Sciences and Social Sciences, Humanities and Arts, and included Scott, who researches early childhood and language development; Jing Xu, who researches molecular motor biophysics; Jessica Blois, who studies paleoecology; health psychologist Jitske Tiemensma; cognitive scientist Stephanie Shih; and mathematician Noemi Petra. Applied math Professor Suzanne Sindi sat in at one of the tables, too.
“Our girls are relatively isolated, geographically, so it’s important to expose them to options they might not have known they had,” AAUW branch Co-President Dawn Johnson said. “This event is such a perfect alignment with our mission of empowering women.”