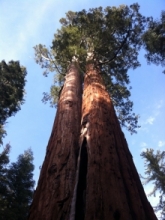 When people get near California’s giant sequoias, they usually look up.
But Professor Steve Hart looks down, and what he finds beneath the trees has intrigued him.
The trees, some of which could be more than 3,000 years old, appear to influence the soil, increasing the pH and the levels of nitrogen, calcium, magnesium and phosphorus, enhancing the soil’s fertility.
“Our hypothesis is that these trees, with their long lives and enormity, have a greater effect on the ecosystem” said Hart, an ecology professor with UC Merced’s School of Natural Sciences and a member of the Sierra Nevada Research Institute. “We tend to think it’s only humans that have legacy effects on the environment, but other organisms have these effects, as well.”
The research Hart is undertaking will add to a growing body of knowledge about the ancient trees, which are protected by law in the Sierra and have not been studied at great length. Ultimately, Hart wants to discover as much as he can about the trees’ complex world.
“These trees do not merely exist, they also shape the ecosystem around them,” said Theresa Fukuda, a UC Davis student who worked with Hart last summer in the Research Experiences for Undergraduates (REU) program in Yosemite National Park.
That’s when this line of research started for Hart, who is interested in plant-soil interactions. His REU project with Fukuda was designed to study the nutrient and greenhouse gas fluxes in the soils under sequoias and what effects the trees have on the fluxes.
That’s when he caught the bug.
“I’m fascinated by these trees and what kind of imprint they might have on the soil,” he said. 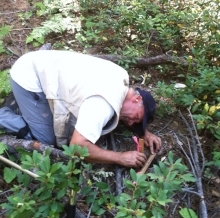 Professor Hart measures soil emissions in the Sierra. After the nine-week REU program ended, he enlisted a suite of UC Merced students to continue the research. He presented the results of the work he conducted with Fukuda at the 99th annual meeting of the Ecological Society of America in Sacramento this summer, and said he’s had two graduate students and two undergraduates working on some of the chemical and biological analyses since. But they are set to graduate or have graduated, and Hart would like to find a student to help him work on the research over a whole year.
Some of the increase in surface-soil nutrients comes from the large volume of biomass – wood, leaves and other living or dead plant material – around the trees. Hart wants baseline readings of soil nutrients and greenhouse gas captures and emissions, then explore how the emissions might change as the climate warms.
“We'd expect a big response from the soil under these trees,” Hart said. He was surprised to find that even though the soil around the trees was bone-dry because of this year’s drought, it was still taking up methane from the atmosphere and releasing carbon dioxide at relatively high rates.
He has extracted DNA from the soil, and now needs to analyze it to see how the soil’s microbial communities are influenced by the enormous trees.
“I have a feeling they cycle nitrogen faster than other species,” Hart said. “Nitrogen is necessary for healthy forests, and the sequoias’ enhanced cycling of this and other nutrients might help them maintain their dominance.”
The presentation Hart delivered at the Ecological Society of America meeting was the first time one of UC Merced’s Yosemite REU projects went before a national scientific meeting, but Hart, who helps run the Yosemite program, said it won’t be the last. He’d like to see every student get published or be able to take their project to poster competitions.
In the meantime, he’s going to keep studying the big trees.
“We know the patterns, but we don’t know the mechanism of the nutrient increase,” he said. “The trees are a small fraction of the forest landscape, but they could have a big impact on the Sierran forest ecology.”