March 31, 2014
Large, naturally occurring low-oxygen zones in the Pacific appear to be expanding, and there is a sharp change in the number of bacteria that produce and consume different forms of toxic sulfur, according to a UC Merced researcher’s latest paper in Nature Communications.
These expanding deoxygenated zones could also contribute to climate change, which, in turn, appears to contribute to their growth.
Professor Michael Beman, a marine microbial biologist with the School of Natural Sciences, spent a month on a research ship sampling water off the coast of Mexico, in the large Eastern Tropical Northern Pacific (ETNP), a deoxygenated zone that extends about halfway to Hawaii. 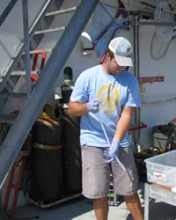 At the surface, this area of the sea is an incredibly productive fishery. But lurking underneath – from a couple of hundred meters down to about 1,000 meters down – there is a deoxygenated or “dead” zone. The robust biological activity at the surface offers a lot of food for the bacteria below, and as they consume, they deplete oxygen.
Dead zones can be man-made, too, in areas where a lot of fresh-water runoff carries surface pollutants and biological materials into the ocean, providing a feast for bacteria that use up the oxygen other creatures need to live.
Beman’s paper, “Deoxygenation Alters Bacterial Diversity and Community Composition in the Ocean’s Largest Oxygen Minimum Zone,” shows oxygen concentrations have pronounced effects on many microbes living in the ETNP, and there have been strong shifts in abundance, indicating the bacteria are sensitive to change.
“It’s important to figure out the long-term effects of this,” Beman said. “These zones appear to be expanding, and we’re not sure what will happen. Their expansion could produce greenhouse gases or change nutrient cycling in these areas.”
Nature Communications is a young, but highly impactful online product of the prestigious journal Nature, which published Beman’s very first paper several years ago. It’s more evidence of the stellar faculty at UC Merced, and the important research they conduct.
Beman’s research used advanced DNA sequencing and statistical modeling to study interactions between different organisms in the ETNP, the largest of three such large zones around the globe. The other two are the Eastern Tropical Southern Pacific, off the coasts of Chile and Peru, which has been extensively studied, and one in the Arabian Sea. Beman plans to compare his model with the other two zones to examine what’s happening and how they line up. 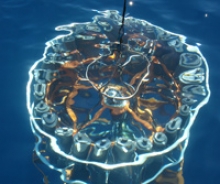 All three are productive fisheries, but don’t have the deep-water replenishment that’s needed to oxygenate the dead zones. Part of that problem is worsening because of climate change – it’s actually slowing that deep-water refreshment. The dead zones are expanding up, down and sideways.
“The zones do change over time, so the next question is how much of that change is because of long-term cycles and how much is because of climate change?” Beman said. “Ocean deoxygenation is the next major issue facing marine life.”
The phenomenon is better understood now than a few years ago, but the ETNP, for being the largest of these zones, has not been well examined. Beman said looking at the linkages between different species, ecosystems and changes can only help us improve our understanding of what we face in the coming decades.