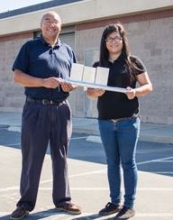 Adapting technology that has become the standard in the automotive, aerospace and air-conditioning industries, Professor Gerardo Diaz has designed and is testing the next generation of solar-collecting units at UC Merced.

”We’re getting about 10 percent increase in efficiency,” said Diaz, with the School of Engineering and co-director of UC Solar.

With funding from the California Energy Commission, Diaz and three undergraduates and one graduate student built a solar water heater.

Instead of having water flow through copper pipes attached to a flat plate with a collective coating applied to it, this solar water-heating system uses flat minichannels, or tubes, made of aluminum with the coating applied directly to the tubes.

The flat tubes placed next to each other become one big solar collector, drawing the sun’s energy directly to the fluid that passes through hundreds of tiny channels.

Copper is usually twice as effective at conducting heat as aluminum, but Diaz said his aluminum minichannel configuration is outperforming standard copper flat-plate design in delivering warmed water to a collecting tank, even on cloudy days.

And that’s just using a set of minichannel pieces that a large aluminum company had available and a cheap solar-collection coating applied to the tubes.

Being able to make the minichannel panels out of copper with a higher-quality coating would increase efficiency even more, Diaz said, though they would have to be mass produced to be cost efficient.

“The aluminum ones are already mass produced, so they cost pennies,” he said.

Diaz’s research and invention are one more way UC Merced researchers are using what is abundant in the San Joaquin Valley – in this case, sunshine – to deliver what could become game-changing technology.

Minichannels have been used for years in car radiators and heating-and-cooling systems, but this is the beginning of exploring their use in solar-energy collection. Diaz has applied for a patent on his invention, and is seeking grants for further research to optimize the system.

Diaz’s students developed the automatic control system that starts and stops the circulation pumps, as well as the temperature controls for the storage tank. The collection panel is installed on the roof at the campus’s Castle research facility, and undergraduate mechanical engineering student Azucena Robles, from Bakersfield, designed a data collection system that checks and records temperatures, flow rates and solar irradiance, so the research can be monitored from anywhere.  UC Merced Facilities Department constructed the minichannel solar collector.

Diaz and his students have been collecting data since March, and want a full year’s worth of information to report on.