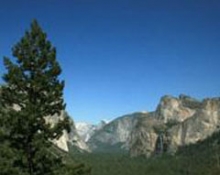 This summer, professors and students at all levels are conducting a variety of research projects on campus, off campus, in the oceans and forests and around the world.

Up in Yosemite National Park, for example, nine undergraduate students are getting a summer experience to last them a lifetime, conducting research with faculty researchers from UC Merced, scientists from the U.S. Geologic Survey and from the park.

“We’ve been in the field every day, and we’re going up to the high country so they will get to experience that, too,” Hart said. “They have already been up to Glacier Point on their own, and they are just in awe of Yosemite.”

Like many of the Sierra Nevada Research Institute faculty members, the student researchers are looking into a variety of issues, such as into giant sequoia ecosystems, soil development, snowpack and water, greenhouse gasses, high-elevation meadows, lake life and the effects of humans on vegetation along the riverbanks.

This project entails carefully evaluating literal and non-literal language, and has excellent potential to lead to a better understanding of how people talk about and think about climate change, and what the implications are for policy-making.

Matlock and Gann also recently founded the Center for Climate Change Communication in the Sierra Nevada Research Institute. They are exploring funding and organizing a series of workshops involving local stakeholders, including Yosemite National Park officials and other UC faculty members.

One of the main goals of this interdisciplinary center is to promote and improve research on communication about environmental issues.

The early 17th century (Shakespeare's time) is full of jokes about cuckolds, and the horns they wear, Amussen said. It’s clear the husband whose wife is unfaithful is the butt of those jokes, and Shakespeare’s comedies are full of them. Those jokes about cuckolds and horns often don’t seem very funny to most readers, and they're left wondering why it is the husband’s fault that his wife is unfaithful. Amussen said it's that gap – the piece readers don’t get – that opens up interesting historical questions.

“The real luxury of the summer is the extended time for research, and the relative lack of interruptions, which allows me to see new connections between different sources,” Amussen said.

Anthropology Professor Robin DeLugan is in Santo Domingo, Dominican Republic, conducting ethnographic research on new public sites of memory that bring attention to the infamous government-led 1937 "Parsley Massacre" in which an estimated 17,000 Haitians who were living and working in the Dominican Republic near the border with Haiti were brutally killed over a period of days.

DeLugan is exploring how the new memory work by civil society actors is connecting the 1937 violence to historical and ongoing exclusion of Haitians and Haitian-Dominicans. She's developing this project as a comparative case study to my ongoing research in El Salvador where she continues to study how new commemorations about the 1932  state-led "Matanza" (massacre) of indigenous people is linked to the ongoing exclusion of indigenous people and to new efforts to include this historically marginalized population.

Back in Merced, over at UC Merced’s Castle Research Facility, students in Professor YangQuan Chen’s Mechatronics, Embedded Systems and Automation (MESA) Lab have a list of research projects in various stages of completion.

Lab Manager Brandon Stark said students are hoping to finish up a concentrated solar tracker they are building for Professor Roland Winston, director of UC Solar. The prototype, which should be finished this summer is based on one of Winston’s patent designs. It’s a small, lightweight and highly efficient solar energy collector that can be placed anywhere and uses less energy to remain at its optimum position tracking sunlight.

A new project at MESA uses aerial imagery to create scientific-grade elevation models, while ongoing projects include work on unmanned aerial vehicles that can be flown for a variety of uses, from monitoring and tending farm fields to checking out the most dangerous areas of wildland fires.

One example is a work in progress this summer: a water-proof vehicle that can land on water and collect water samples, then fly home.

The students are also working on learning how to use a 3-D printer to make their own aerial vehicles with sensors built right in, and working out the details of a “cognitive lighting system” that can predict where it needs to shine by monitoring the environment and people.

In Professor Sachin Goyal’s lab, students are working to understand how and why DNA molecules take the shapes they do and how those shapes affect their biological functions. They are looking into better ways to model and predict the shapes, or “deformations,” and to come up with a computer code that can better determine the “laws” of deformations.

The hope is that a better understanding will help researchers figure out how to solve improve medical treatments for diseases like Parkinson’s.