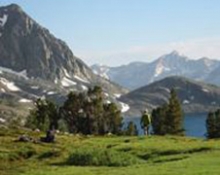 Many universities offer the Research Experience for Undergraduates (REU) program, but they don’t have what UC Merced has to offer.

“Yosemite really draws people in,” said Professor Stephen Hart, one of the REU program leaders. “Other REUs might take students into the field, but not into a national park.”

The National Science Foundation has awarded UC Merced a $318,000, three-year grant to take eight undergrads from around the country to live in the park for nine to 10 weeks each summer and gain invaluable experience working directly with faculty researchers on projects.

“Living and working in Yosemite was the best experience of my undergraduate career,” said Raymond Gutteriez, a California State University, Fresno, grad and REU student in 2009. “Before the REU program, I knew nothing about the National Parks Service (NPS) or the U.S. Geological Survey (USGS) and what they do. I learned a lot about different career paths into natural resource management and research.”

Through April 26, they are accepting applications online from interested students all over the country, though they are targeting students from California’s Central Valley who might not otherwise have the opportunity to get research experience as undergraduate students.

The program runs from June 16 through Aug. 17. Students are matched with one of nine projects proposed by UC Merced faculty members and scientists from the NPS and USGS, looking at animals, plants, lakes, rivers, meadows, mountains, people and places of Yosemite.

“The main experience we want to offer is an intensive research experience in one of Earth's most beautiful places,” said Beman. “The students perform scientific research and learn skills that will be valuable for future work, but we also hope this is a unique life experience for them.

“It is really important to teach our next generation of scientists how to do research, and the best way to do this is to get them directly involved – get their hands dirty and their feet wet! And this is more than just learning how to measure something in a lab – it is about testing hypotheses and analyzing data, and those are skills that are widely applicable.”

Gutterriez, who majored in biology with an emphasis in ecology, is a member of the Wuksachi Band of Mono, Native Americans who lived in the Sierra Nevada. He applied to the REU program because he wanted to continue his ancestors’ legacy of stewardship of the land and a balance between humans and the environment.

His project involved examining the effect of fire on the occupancy and reproductive success of California spotted owls, a species of special concern in the state, using data he collected and data from his USGS mentor’s Ph.D. project.

He’s heading to New York soon for grad school at the State University of New York College of Environmental Science and Forestry in Syracuse, where he’ll work on a forest project with the Menominee Nation of northeast Wisconsin.

Like Beman, who was an REU student when he was in college, Gutteriez is finding that the experience is still paying off as the program contributed to his life’s ultimate goal.

“I want future generations to look at the world we have stewarded for them and be proud of their ancestors,” Gutteriez said. “That’s why I applied to the REU program.”