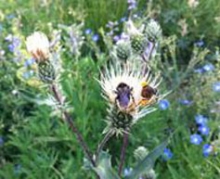 Climate change alters the way in which species interact with one another- and not just today or in the future, but also in the past, according to a review article by UC Merced Professor Jessica Blois and colleagues coming out tomorrow in the journal Science.

“We found that, at all time scales, climate change can alter biotic interactions in highly complex ways.  So if we don’t incorporate them when we’re anticipating future changes, we’re missing a big piece of the puzzle,” Blois said.

A special issue of the prestigious research journal, entitled "Natural Systems in Changing Climates,” features the article and a podcast by Blois, one of UC Merced’s newest faculty members, and three colleagues from Yale University, the University of Maryland Center for Environmental Science and UC Berkeley. They have contributed a paper called “Climate Change and the Past, Present and Future of Biotic Interactions.”

This is another example of how the work of UC Merced’s stellar faculty members is being recognized.

“Biodiversity does respond to climate change, and it’s a perfectly natural response to past climate change,” Blois said.  But the worry is that the rate of current and future climate change is more than species can handle naturally.

“We are seeing responses in many species,” she said, including plants that have never been found before in certain climates – such as species of palms found in Sweden – and in animals moving to higher elevations as their habitats grow too warm for them.

What interests the researchers in this field is how interactions between species change, for example between predators and prey, or between plants and pollinators, and how to translate data from the past and present into future models.

The article indicates that while much more research is needed, changes can be observed today as well as in the past, though it’s harder to gather information from the fossil record, because complete information about the interactions isn’t always available.

There are also big changes observable at the end of major climate changes, such as the last Ice Age, when large herbivores went extinct.

Without those mega-eaters to keep certain plants at bay, new communities of flora developed, the likes of which we do not see anymore, because there have been many other changes.

“People used to think climate was the major driver of all these changes,” Blois said, “but there’s a lot of work that indicates it’s not just climate. It’s also extinction of the megafauna, changes in fire and expansion of humans. It’s all linked.”

The reason these novel communities of plants and animals is particularly interesting is because we are in a period of massive climate change, and we don’t know what’s going to happen to the Earth or to the world we are used to.

“People are comfortable with the way things are now – we know where to plant crops, where to get water,” Blois said. “We want to know how to respond to the changes that are happening, but if the future is highly novel, then it’s also hard to predict.”

Blois is a paleoecologist with the School of Natural Sciences who studies the past from the last Ice Age on. She asked for input from researchers who study “deep time,” or the very distant past, as well as those who study the present to help make predictions about what the future holds for living things as the climate shifts.

Working on the article allowed her to build a new community of her own – junior faculty like herself, with whom she has never worked in some cases, but knows of from her field.

The invitation from Science to submit an article came in January, just as she was beginning her first teaching job here at UC Merced. She had just moved from Wisconsin and bought a house, and she had two months to pull together the article, not knowing if it would be accepted.