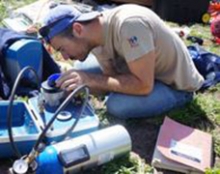 The theory that temperature limits how far up in the mountains trees can grow looks like it’s true, but not in the way researchers had expected.

Their work indicates some trees researchers thought wouldn’t grow at the highest elevations because of the cold don’t fare better when they are warmer, either.

A series of experiments in Colorado, in which seedlings were planted and then warmed under infrared radiation panels to simulate climate change, showed warmer temperatures also dried the soil faster, subjecting the baby trees to more moisture stress.

“Each species has its own ‘climatic comfort zone,’” Moyes said. Recent and projected climate warming should push the limber pines to grow further uphill than normal because the temperatures up higher would be warmer, too.

Moyes and collaborators found that the warmer climate can actually prompt the trees to slow or stop photosynthesizing in mid-summer, Kueppers said. Three people helped collect and analyze data and write the paper, which focuses on the physiology of the young limber pines.

This work is just one more example of how UC Merced researchers are contributing to the world’s overall understanding of climate change.

“We found that moisture is the stronger constraint to the trees’ growth and survival than anticipated, and warming enhanced moisture stress and reduced survival rates,” Moyes said.

Moyes has been part of Kueppers’ research group for about three years now, coming to UC Merced from the University of Utah, where he earned his Ph.D. He came specifically to work with Kueppers, who said he has been a valuable part of the team.

“He has been doing great work and learning some new skills, himself,” Kueppers said.

The project continues for at least one more field season, and the group and collaborators at UC Berkeley, the University of Colorado and the U.S. Geological Survey are submitting proposals to continue it further.

Much more data is needed before researchers can make larger predictions about how warmer temperatures will affect higher elevations and their ecosystems, Kueppers said.

“We don’t know if this is just one species of pine affected this way, or if it is a universal problem,” she said.