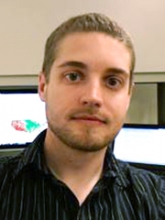 That’s a lot of space for growing biofuels that could replace between 5 percent and 30 percent of the United States' primary energy or liquid fuel demands, he said.

Zumkehr and Professor Elliott Campbell with the School of Engineering wrote a paper based on the mapping, which was published recently in the top-cited journal Environmental Science & Technology.

It’s another example of how UC Merced researchers are contributing knowledge that will lead to more informed energy policies.

“We used satellite images, census data and modeling to find all the abandoned cropland where biofuel can be grown,” Zumkehr said. “If this actually happened, it could meet some of the U.S.’s primary energy or liquid fuel demand.”

As a student in Campbell’s program for the past two year, Zumkehr focuses on energy and sustainability, looking at agriculture, biofuels and local food issues. Being from Atwater, in the heart of the San Joaquin Valley, Zumkehr has an interest in agriculture in particular.

The maps are theoretical in the sense that not all of the land is available or of a quality where crops could be grown efficiently without farm subsidies. But he said crops like switchgrass and Miscanthus, two tall grasses, could be an ideal biofuel crop.

“It could be dried and burned, used in a gassifier or developed into liquid fuel,” he said. “If we were to do it, it’s not really a long-term solution. Biofuels alone are not going to replace fossil fuels or coal, but they could supplement other energy sources.”

He chose the two grasses, he said, because they don’t require much fertilizer, are perennial and tend to improve the soil they grow in if managed properly. Also, they could provide more energy than corn, which is now used in ethanol.

Zumkehr’s work, which took about 18 months to produce, can also be used for other projects his research group has planned, such as using the data to consider food growth and energy storage.

But even more importantly, Zumkehr’s work is central to the work being done in Campbell’s research group. His methods were laid out in a proposal to the National Science Foundation, and the agency granted funding to support the students in Campbell’s group.

The maps could be used for a variety of projects, including researching habitat, land-use changes and agriculture.

“I just wanted to give an accurate picture of one option,” Zumkehr said.

Though publishing is not a requirement for master’s students, Zumkehr said he plans to pursue his Ph.D. with Campbell, so the publishing experience will be helpful. The work will also carry over into his next project, looking at the potential for the United States to feed its entire population within their own counties instead of transporting food across the country.