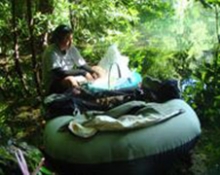 Graduate student Sharon Patris likes spending time at a lake in the middle of the forest on an uninhabited island in the western Pacific.

The marine lake named Ongiem’l Tketau and informally known as Jellyfish Lake, is home to the golden jellyfish, a species Patris studies as part of her work with UC Merced School of Natural Sciences Professor Michael Dawson in Palau.

Patris, who is working on her master’s degree, is just one example of the diverse and wide-ranging reach of UC Merced’s graduate programs. As a Palauan, she said she’s happy to have the chance to work in her homeland while earning her advanced degree from a UC campus.

Dawson and colleagues have been studying biodiversity in the western Pacific since 1995. A grant from the David and Lucile Packard Foundation in 2005 enabled the Coral Reef Research Foundation (CRRF) in Palau, where Dawson was working at the time, to hire and train a Palauan in the conservation biology of marine lakes.

Patris was finishing her bachelor’s degree in Boston when she met Dawson and got the position.

“I had been working with Professor Dawson on the marine lakes project for three years after finishing my undergrad studies, and I wanted to continue in graduate school,” Patris said.

Joining Dawson’s lab allowed her to continue working on a project she had loved since she started in 2006.

“You need to be creative and hardworking to be a successful researcher,” Dawson said, “and Sharon definitely has those talents.”

She monitors Jellyfish Lake and 17 other lake and ocean sites. She and others on her team check and document temperature, salinity, oxygen and pH in the water, catch and count the jellyfish and zooplankton – which the jellyfish eat – and maintain weather stations to learn how populations respond to environmental change.

She also surveys a population of Aiptasia – a species of anemone that has invaded Jellyfish Lake – for her own master’s thesis. She’s trying to find out how the anemones affect the lake’s endemic species.

While it might sound like an idyllic setting – a World Heritage Site where diving in the crystal tropical waters is a favorite pastime – working in the lake isn’t without its challenges.

“There are times when we will have to scale steep walls and hills, watch out for loose rocks and avoid poisonous trees on the islands,” Patris said.

Then there are the rare and random encounters with salt-water crocodiles.

But she loves the work, both in the field and in her graduate lab.

“I am in a lab of graduate women who are working on entirely different projects. Learning about the types of things they do and what they are learning through their projects has made a huge impact on how I view science and have come to understand it,” she said. “Seeing their passion and enthusiasm about science inspires me to continue in this field.”

Patris is evidence of UC Merced realizing its original visions, such as making higher education a possibility for those who might not otherwise consider it.

“Educating local Palauans about the lakes is a critical aspect of the project,” Patris said. She and her colleagues have given presentations to the rock islands’ managers, the Koror State Government, and visiting groups including high school and community college students. Patris also shares her knowledge with her own young relatives, which has sparked an interest in science. That’s unusual in her hometown, she said.

She and her colleagues also wrote a booklet for tourists, explaining the unique ecosystem and threats it faces, and encouraging interest in and understanding of research.

The work has changed Patris’s view of her homeland, too.

“Now, when I see the rock islands or the ocean, I don’t just think of them as places for pretty picnics or to swim,” Patris said. “I have a greater appreciation of how these ecosystems work, and I hope other people will, too.”