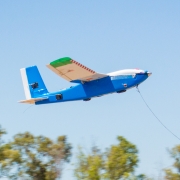 Other UC campuses have drone research programs, but UC Merced might be the only one with two certificates of authorization from the Federal Aviation Administration, allowing students to fly autonomous, unmanned systems at higher altitudes and, possibly, in locations they haven’t flown before.

As drones and the sensor packages they carry improve in price and performance, many campuses are considering conducting research on unmanned aerial systems (UAS) and their applications.

While the MESA Lab students can test-fly their drones at very low altitudes outside the lab at Castle, each FAA certification gives the official OK to fly specific UASs at specific locations.

For one certification, Stark and Professor YangQuan Chen selected a fiberglass plane with a 7 ½-foot wingspan that flies for about 45 minutes at a stretch and can carry 2 pounds of scientific equipment, such as environmental sensors and cameras for this permit. They have authorization to launch from a site within a few miles of campus and can fly it up to 700 feet in the air.

However, “The system is capable of flying much higher if the mission warrants and is allowed,” Chen said. “It’s capable of research in a number of important areas.”

Chen and the students will also test multi-spectrum mosaic imaging this summer now that the FAA has granted another certificate to allow them to fly over the Merced Vernal Pools and Grassland Reserve adjacent to campus to make the most comprehensive aerial survey of the property yet.

“We’re excited to get out there and start flying as soon as we can,” Stark said.

They can load the plane with regular, infrared and thermal cameras, and by flying slower, at lower altitudes, “We can get down to a couple millimeters of resolution,” Chen said.

Using the drones’ super high-resolution pictures, researchers can look at plant health, growth and stress. Innovative early detection of crop stresses is being investigated in the MESA Lab.

There are many advantages to the unmanned systems, Chen said, the greatest of which is that they remove the human-flight risk, especially in places inherently dangerous to humans, such as in emergency situations – fires, earthquakes and other disasters. Sensors can tell the vehicles’ remote controllers whether air quality is acceptable for humans, or of there are cool or wet areas in the midst of a fire. Remote views can also help natural resource managers make better decisions.

The planes themselves are “crash-worthy,” Chen said, meaning they can withstand some abuse, and even if they don’t, no one gets hurt. They are also capable of being launched without a runway – using a tripod launcher or a slingshot.

If the MESA Lab team finds people, groups, businesses or agencies that need the data acquisition services it can offer, the lab can apply for additional specific permits.

Chen said for now, the data drone program at UC Merced involves only a few faculty members, but he has a vision for a research institute like UC Solar, where people from multiple UC campuses and disciplines work on various projects involving UAS.

The FAA names “centers of excellence” for unmanned systems, where the agency, the university and its affiliates, like national laboratories, work on various projects.

Chen wants to see UC Merced earn that designation in the next few years.

“I think we are uniquely positioned and can earn national prominence in this field,” he said.